Will he or won’t he? That appears to be the key question about whether or not President Trump will be providing enough details about his purported stimulus plan to the joint-session of Congress on Tuesday. There is widespread fear that lack of details could align with month end flow to provide more supply of USD and potentially bring DXY lower still.

In addition to President Trump, the Fed Speaker calendar is rather full this week, which opens up second-tier volatility. On Friday, Chairwoman Yellen will provide her Economic Outlook, which will likely be supportive of the multi-hike in 2017 view, but discuss shortfalls in the labor market due to structural gaps widening in skills supplied vs. skills demanded. Yellen will be preceded by Fed Vice Chair Stanley Fischer on Friday, which rounds out a heavy Fed week. However, Fed Fed members are expected to make the impact of President Trump.

Either way, traders should respect the upcoming event risk this week. A slew of concrete details that push inflation expectations higher and possible to show the Fed as being behind the curve could cause USD to appreciate aggressively relative to recent volatility.

Most of the G10 FX currencies have been spectacularly quiet with few macro views changing. The dollar does appear to be at a crossroads that we can see on the chart below. We’re trading near the lower quartile of a multiple-month rising channel. This type of zone is known as Trend Support, and many traders have been anticipating that Buyers will soon step in to bid up the USD. On the other hand, much of the hope that helped bid-up the USD has been pricedin, and despite a tightening Fed, it appears that there is still room for USD weakness that would be validated on a break below the channel support. Channel support on the chart below aligns with the base of the Ichimoku Cloud on the Daily Chart near 100.

The chart below highlights the recent corrective high, which ran out of steam near the 50% retracement of the 2017 range. A breakdown from here would be indicative that most of the recent move higher to 101.70 was more profit takers than buyers looking to Bid the USD higher. Current resistance remains near the February high of 101.76 followed by the 61.8% retracement of the 2017 range at 102.07. A break above there could see the DXY shorts bail in a hurry and bring about a sharp appreciation. If we do not see the hoped for concrete details of a stimulus alongside JPY & EUR firming up, the USD could have a difficult road in the coming weeks.

Either way, the event risk ahead and the levels were focusing on should provide a helpful map. 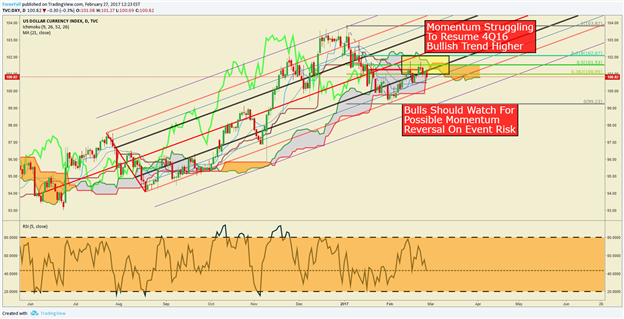