U.S. Crude Oil inventories are showing that Shale Oil production is taking the opportunity of a willing cut in production by OPEC. On Wednesday, Government data in the U.S. showed a surprising +8.21 million barrels to 528.4 million barrels, the highest in weekly data going back to 1982 per Bloomberg and the highest production amount in over a year, which aligns with the increase in Oil Rigs per Baker Hughes.

In addition to rising supplies in the US, which become increasingly dependent on a bump in demand to keep the price stable, Oil traders are also watching the USD. We continue to see the greenback sit atop the G8FX Strong/Weak ranking due to anticipated action from the Federal Reserve in 2017. A continue appreciation of USD could further strain demand for Oil, which would likely increase price pressure given the rise in Shale Production.

CRUDE OIL TECHNICAL ANALYSIS – For much of 2017, the price of Crude Oil has oscillated above $50/bbl. Despite the tug-of-war between US producers and OPEC, Crude oil prices remain stuck in a narrow range of $55/50, but the longer-term structure appears trend continuation. While there was excitement on the recent run to $55/bbl, it now appears we are tracing out a larger bullish Triangle chart formation than previously anticipated that could take weeks, if not months to complete.

Others are viewing this as a longer-term topping pattern before a new attempt at $20/bbl, though I do not take that view.The invalidation of the larger Bullish Triangle would be a close below $50.75/bbl.

We will continue to favor the patient-longer-term Bullish view absent a close below Triangle support. A daily close above the 55.21-65 area (January 3 high, 38.2% Fibonacci expansion) targets the 50% level at 57.18 and quite possibly, higher. Wednesday’s drop will likely pull-out value buyers as we’re now trading at the bottom of a multi-month range. However, a breakdown here will turn the focus on the 50% retracement of the November-January range that aligns with the 200-DMA at $48.72/bbl. 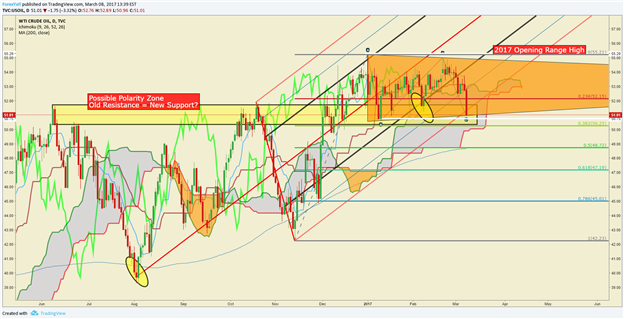 Key LevelsOver the Next 48-hrs of Trading as ofWednesday, March 8, 2017