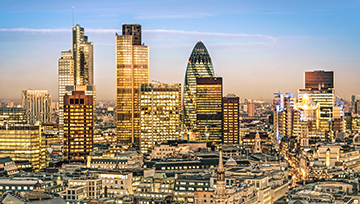 Yesterday, global stocks were shaken on political upheaval in Washington. The FTSE 100 managed to escape yesterday’s sessions relatively unscathed, but it wasn’t until the afternoon session in the U.S. (when London was closed) that the S&P 500 took another big leg lower to close near the lows of the day. We saw this spill-over into Asia overnight and Europe is under a bit of pressure at the time of this writing.

The footsie was already set up for weakness before the headlines began rolling, as it was trading at the top-side trend-line extending over the March high from the January peak. We noted it as only a level of minor resistance, but nevertheless still resistance.

With a little more selling, on a drop below the old March high the market will find itself at an interesting juncture – the 2013 top-side trend-line we’ve been discussing for several months. Last week there was only a little pause on approach before slashing through on Friday. Given the lines influence as resistance since January will it now have an important impact as support, or will we see another event like in March where it traded above for a couple of days before retreating back below? The difference between then and now and perhaps the difference-maker, is that in March the footsie started wobbling as soon as it broke above; while this time there was a clean break with momentum. A lot depends on how bad things get in the U.S. – whether it’s a short-lived reaction to turmoil surrounding the Trump administration or the beginning of a significant decline. The thinking on this end is there is at least a little more weakness in store, but not sure just yet it turns into a rout.

Keeping it simple and consistent in approach, we’ll react to price action as per usual. On a drop into old resistance now turned potentially new support (~7400), how the market responds will be the tell. With lesser importance, the April trend-line is also in the vicinity. If buyers step in, then we may have a successful test on our hands; but drop on through, then we could see a larger decline unfold and the recent surge will have turned out to be another false breakout. 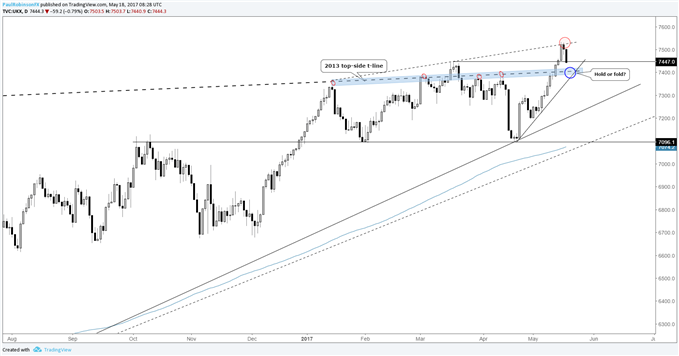