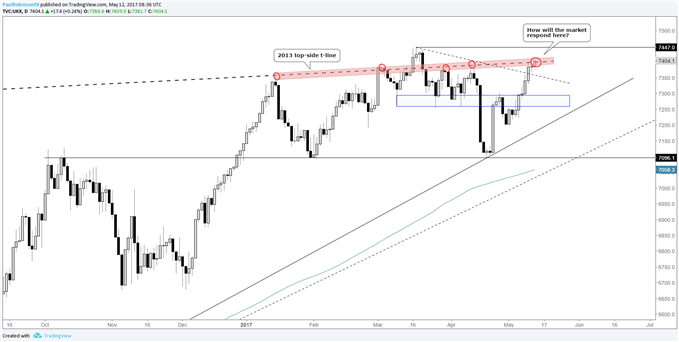 FTSE 100 – Watch This Trend-line, It's Been a Problem Since January

The FTSE 100 and ‘Brexit’ – Find out what our analysts have to say about it in our quarterly forecasts.

Yesterday, as anticipated earlier in the week, the outcome of the BoE meeting had little impact on the FTSE 100, and the limited volatility we saw in markets was concentrated in sterling. An often occurrence – FX and rates react to key fundamental events, stocks not so much.

There was a solid thicket of resistance in the vicinity of 7255/300 (bottoms from March & April), but on Tuesday the footsie was able to fully clear above, and with that the focus shifted towards the trend-line off the March high, and more importantly the long-term 2013 to current trend-line. It’s been a problem for the market on four occasions since January, with only one instance back in March where the market was able to push on through for a whole three days.

We’re at the top-side trend-line now.

Given its influence, we look for the market to struggle. How it struggles will be the tell moving forward: a small dip and consolidation just beneath, or will a swift rejection develop? We’ll soon find out. Tactically speaking – first off – we don’t buy resistance, so the FTSE will need to clear above and also take out the record high at 7447 before becoming constructive from here. Even then, buying breakouts is not the preferred approach; instead we would like to see a breakout, then look to old resistance to act as new support on a dip. For would-be shorts, a rejection from the 2013 t-line may present an attractive way to play short-term weakness. The past four times the market turned lower from this line of resistance it did so in very short-order (a couple of days, tops). So, if it is going to turn it should be no later than early next week. If it doesn’t turn, the longer the FTSE hangs out around resistance the more likely it is to eventually break it and make a run for new record highs.