The New Zealand Dollar appears to be in the process of staging a rebound driven by the September RBNZ meeting that confirmed the central bank’s shift back toward a more patient approach regarding monetary policy decisions after surprising markets with an aggressive 50bps cut back in August. NZDUSD price action remains subdued, however, identified by the broad downtrend since mid-July. 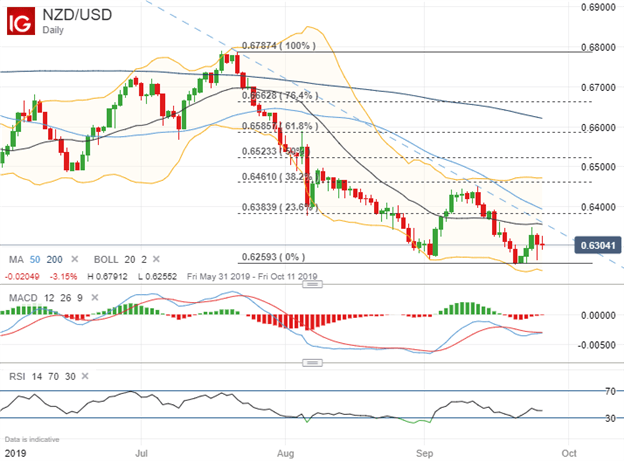 Though the Kiwi might be attempting to put in a bottom around the 0.6250-0.6300 price level, which has previously served as an area of confluent support during the currency pair’s steep slide back in 2015. The uptick in the RSI off oversold territory and MACD indicator looking like its about to turn positive provide encouraging signs for potential upside continuation in spot NZDUSD. Yet the 20-DMA and 50-DMA in addition to the aforementioned downtrend line could keep further gains by the New Zealand Dollar at bay. 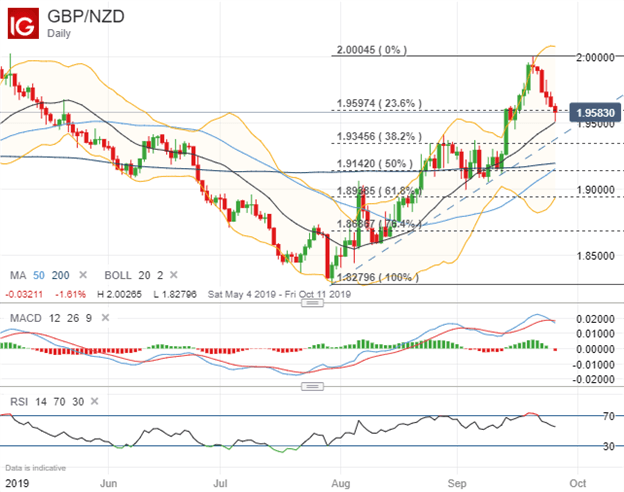 Spot GBPNZD has edged lower after printing what appears to be a double top right at the 2.0000 handle – a major zone of technical confluence highlighted by key monthly levels dating back to 2008 that I highlighted previously when I wrote GBPNZD looked set for a big move.

The recent episode of strength exhibited by the New Zealand Dollar has driven spot GBPNZD down to test the 1.9500 price level, which happens to align with its 20-DMA. The Pound-Kiwi could be clinging onto this simple moving average as well as its 23.6% Fibonacci retracement of the bullish leg beginning late July for support. If this area gives way to spot GBPNZD bears, the uptrend support line extended from the recent string of higher highs comes into scope before the mid-point retracement and longer-term DMAs around 1.9100 are eyed.