Brexit has sent the GBP price action on a rollercoaster ride. While political uncertainty surrounding the UK’s withdrawal from the EU has largely resulted in great pain for the British Pound, the Sterling has recently enjoyed a healthy rebound, which was driven largely by news that Parliament voted to force another delay to the current October 31 Brexit deadline.

Although the perceived risk of a no-deal departure next month has dissipated, much remains unresolved. Consequently, GBP forex traders could face heightened turbulence over the coming days with PM Boris Johnson set to meet with EUCO President Donald Tusk to discuss alternative solutions for the controversial Irish backstop next week. 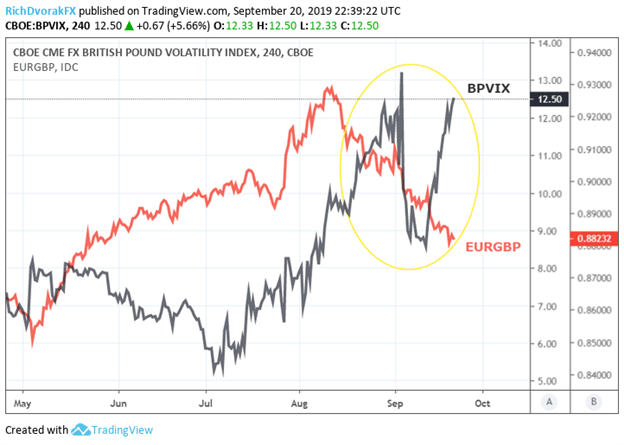 In our previously published British Pound weekly technical forecast, we drew attention to BPVIX (Cboe’s 30-day British Pound implied volatility index) and how it can be useful for quantifying Brexit uncertainty priced in by markets. Generally speaking, there is an inverse relationship with BPVIX and spot GBP prices.

The rally in the British Pound was accompanied by a sharp drop in BPVIX earlier this month as perceived Brexit risk faded, but it now appears that another spike in Brexit fears could present daunting headwinds for a sustained rebound in GBP prices. That said, the divergence between BPVIX and EURGBP may soon revert back toward the close direct relationship typically held. Above all else, the British Pound overwhelmingly stands to gain in response to positive Brexit news and developments that decrease the likelihood of no-deal. 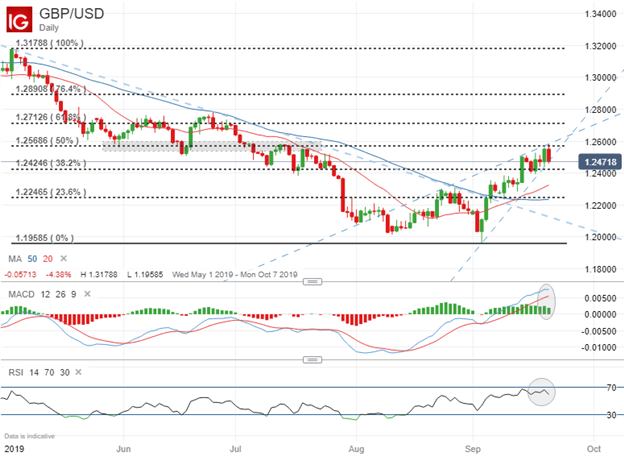 Turning to the Pound Dollar, there is evidence that the recent rally in spot GBPUSD could be losing steam. The impressive uptrend in spot GBPUSD since bottoming out on September 3, which marked a near 3-year low for the cable, appears to be facing its first test of technical resistance. Spot GBPUSD wilted after touching confluent resistance posed by the mid-point retracement of the currency pair’s bearish leg beginning in May. Fading upward momentum is also hinted at by the RSI and MACD indicators. Meanwhile, spot GBPUSD could be forming a bearish falling wedge pattern.

GBPUSD bears might look to push the currency pair lower toward technical support provided by the 38.2% Fibonacci retracement level of its May 3 swing high. If this area of confluence fails to keep spot GBPUSD buoyed around the 1.2400 mark, the 20-day simple moving average could come into scope. If the 20-DMA gives wayor if no-deal Brexit fears become agitated again, which will likely be accompanied by another spike higher in BPVIX, spot GBPUSD could sink toward the 23.6% Fib and 50-DMA near the 1.2200 price level. 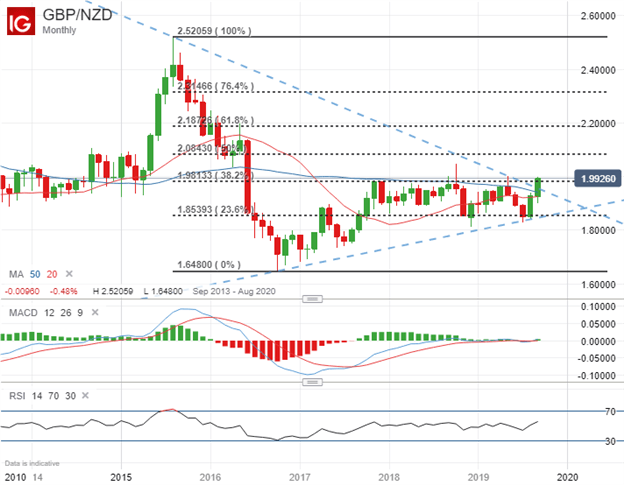 Across the spectrum of major British Pound currency pairs, the monthly GBPNZD chart is quite intriguing – particularly when weighed against a fundamental backdrop that highlights an upcoming RBNZ rate decision. GBPNZD upward momentum has recently gained traction indicated by the RSI perking up a bit and bullish divergence on the MACD.

In lieu of staying sidelined after already delivering 75-basis points of interest rate cuts, another dovish move or guidance by the central bank aiming to further insulate its economy from slowing global GDP growth could reinforce the impending topside breakout in spot GBPNZD from choppy its 2-year trading range. The 1.9900 price level has historically served as a major area of technical confluence, however, which could send the currency pair pivoting back lower if it fails to print a fresh year-to-date high.