The last time we looked at the DAX it was triggering a head-and-shoulders pattern, but as we have seen the move lower was truncated with support holding on the daily time-frame. The area around 13400 was further cemented as a floor should the market turn back lower from here.

Looking higher, the DAX could be on its way to achieving a new record soon, with the 14131 level being the line to cross. Given the general tone in risk trends, global stock markets continue to look steadied for further gains in the near-term.

Crossing 14131 will have the DAX in new record territory, but that doesn’t mean there might not be any new levels or lines of resistance. The recently broken trend-line from the very tail-end of October may act as a minor level. It currently resides in the 14300s and quickly rising.

If the DAX struggles to cross into record territory, the index could may stall out and go into range-mode for a bit. This could end up a bullish consolidation as long as the area in the 13400s, just recently held, continues to hold.

From a tactical standpoint, given the proximity to the record high and distance off support, it doesn’t present the best opportunity from a risk/reward perspective to initiate fresh longs. As far as shorts are concerned, there might be an opportunity on a failure to break out as range conditions set in. But generally speaking, a long bias remains in play until we see pervasive price action suggesting otherwise. 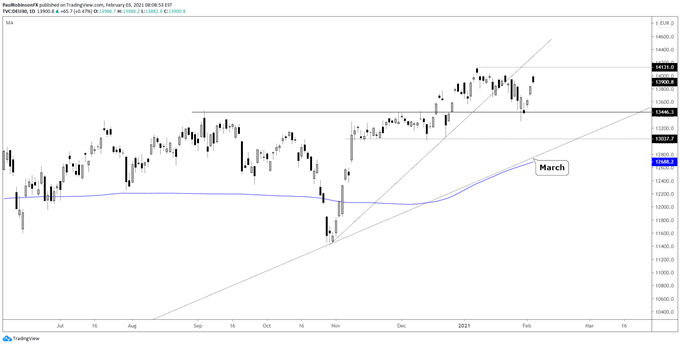