On the 21st the DAX broke hard by over 4% out of a wedged up price sequence that suggested that we would see more follow-through. But it wasn’t long after that a bounce developed, however, it doesn’t mean the index is in the clear.

It is possible the bounce may have concluded with Monday’s big up day and that price rolling over the past couple of days could start to pick up some momentum. A break above 12873 would put this idea to rest, at least temporarily, while a dive back towards recent lows would strengthen a bearish bias.

A break below 12341 will have the 200-day in play down to 12179. It is entirely possible that the index makes headway in neither direction, as even though we had a strong breakdown price is still stuck at the same levels it was at in early June. It may take some time to gain clarity…

DAX Daily Chart (only a bounce?) 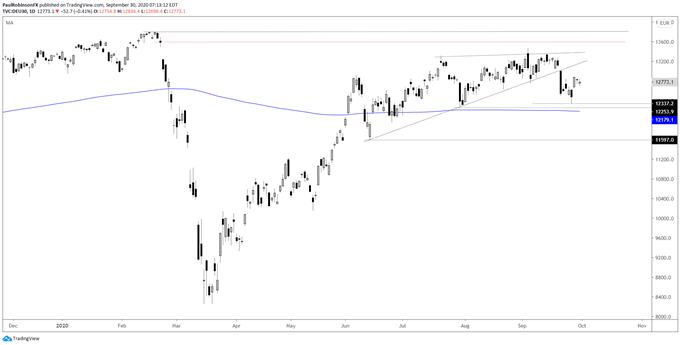 The CAC broke from a wedge formation, but the confirmation we had been looking for never came to pass as the 4691 level was held on a daily closing basis. A daily close below 4666 should have momentum picking up as key support is left behind. In the event that support continues to hold there is much work on the top-side to be done as the general trend/tone isn’t very favorable.