The DAX recovery is coming from a seriously strong level of support, but at the moment it is at risk of making a run back lower towards long-term support if the break of a short-term rising wedge can lead to the breaking of another near-term shelf.

The ascending wedge was triggered with yesterday’s 4% down day, and on that there are some gap-fills that could come into play in the coming sessions. However, there is decent support right around 10200 that needs to break first. A break below 10198 will have the April 6 gap-fill at 10069 within reach, followed by the April 3 gap down from 9841 to the fill at 9527.

Beyond there and we are getting into retest territory of the March low. If the area around 10200 holds, then the wedge-break may turn out to be false a trigger, so the key is to wait for that final piece of confirmation before running with a more aggressive short bias.

The monthly chart is one of my favorite long-term charts of any market. The low in March arrived the trend-line dating back to 1982. It crosses under the 2003 and 2009 lows, also very important lows. Furthermore, that trend-line is in confluence with the 2000 and 2007 tops, very important bull market highs.

The March low is viewed as an extremely pivotal threshold moving forward from the macro-tech perspective. Stay above and the trend is at worst sideways, but still keeps the market pointed higher. A break below could usher in a very nasty prolonged bear market. For now support is to be respected.

The CAC didn’t recover as vigorously as the DAX did, which leaves it exposed to getting hit harder should another round of selling set in. The 4318 level is an important one followed by the 4154 gap from April 3. Beyond there we are in retest territory along with the DAX, which for the most part with the German benchmark being the larger market and having that massive level of support, will be the market to watch from a macro-tech standpoint. 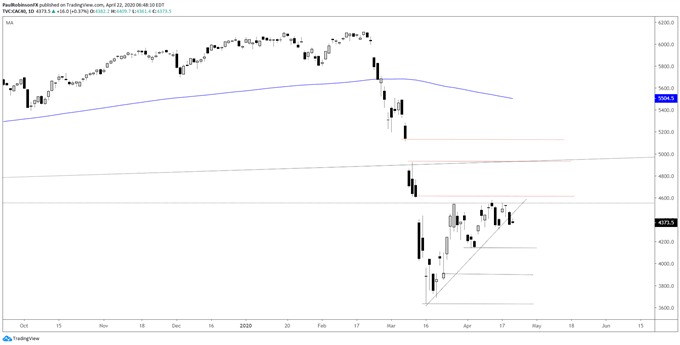