The DAX is working its way below the trend-line rising up from the August low. The January 6 test resulted in a strong reversal, and most recently on Tuesday it held well again. The price action on two occasions this month has demonstrated the line’s importance, and should we get some real separation from it soon selling could turn aggressive.

A close below the Tuesday low of 13163 will have the DAX clearly below trend support. In the event it breaks, the next area of solid support arrives via lows held over the course of a month from early December to early January, clocking in around the vicinity of 12948/886. It’s a strong level of support, so even if the market wants to continue lower it may act as a temporary shelf.

If the DAX can turn around and close back above the trend-line, then the break won’t be confirmed, and the upside will be kept intact. Given where we are we won’t need to wait long before we have confirmation one way or another. 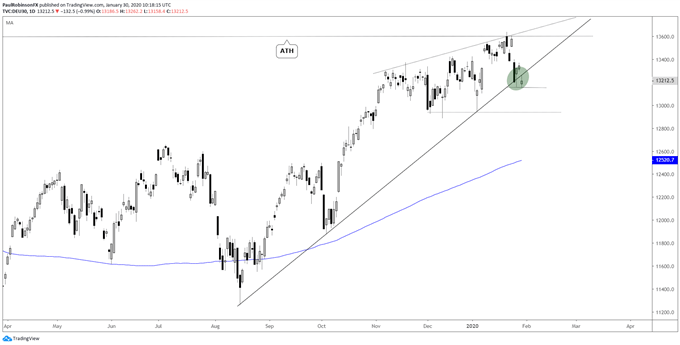 The CAC 40 is leading to the downside, and as such it is already below the equivalent line of support that the DAX is currently trying to hold. The French benchmark rallied in an orderly fashion from the August low, resulting in a very clean upward channel. With it having broken down out of it and failing to recover so far, it is sits more precariously than the DAX.

On a break below 5857, and with some help from the DAX also participating in a break of the August trend-line, look for the CAC to run lower towards the 5700-line. There is good support there via October (resistance) and December (old resistance became new support). The 200-day moving average is quickly rising up not too far below price support.

At this time, it appears the best case is for the CAC to trade sideways before eventually giving way to more weakness. It will take a strong push higher and reclaiming of the broken underside parallel of the channel before a neutral to bearish bias will be reversed.