For longer-term fundamental and technical analysis on the DAX & EUR/USD, see the Q1 Trading Forecasts.

Earlier in the week, we made note that while the DAX and CAC were both in ‘breakout’ mode, there were challenges straight away before they could rally further. Each had top-side trend-lines to contend with, and while often times not considered the most formidable type of resistance in a strong market, when other factors come into play, the presence of those lines can be strengthened.

Euro & risk both weighing, the latter may be the bigger problem now

The euro has been on a tear for the past month, and is was during its most recent pause that the DAX was able to rally to new heights. However, In the past couple of sessions, with the help of the ECB and broad dollar weakness, we’ve seen the euro surge again, making its presence felt again.

Further weighing, is the growing instability we are seeing in risk appetite. U.S. markets haven’t experienced a decline, but the S&P 500 is starting to get tipsy as noted yesterday. The past couple of sessions the Nikkei has taken a hit from its highs, while the FTSE has downright been jammed lower this week. This all adds up to weakening risk sentiment.

The euro is trading around a long-term trend-line dating back to 2008, so it may struggle to trade much higher, which could be a relief for the DAX, but risk sentiment looks like it has potential to rollover, so currency impact could soon diminish and lose its relevance.

While the aforementioned influences matter, at the end of the day, technical factors (i.e. trend, price levels, etc.) on the specific market in question are where we put the most weight. The DAX is still pointed higher despite getting shot down from record highs in forceful fashion.

The sequence of higher-highs and higher-lows since January is still intact as long as trade below 13137 doesn’t develop. If it does, the trend-line from the tail-end of August will come into play, along with an even more important trend-line extending higher from June 2016.

On the top-side, it appears the 2015-current overhead slope is going to be a hurdle the market may struggle to overcome. Overall, the technical posturing for the DAX isn’t particularly favorable at the moment and needs to get in gear or run the risk of further technical damage. 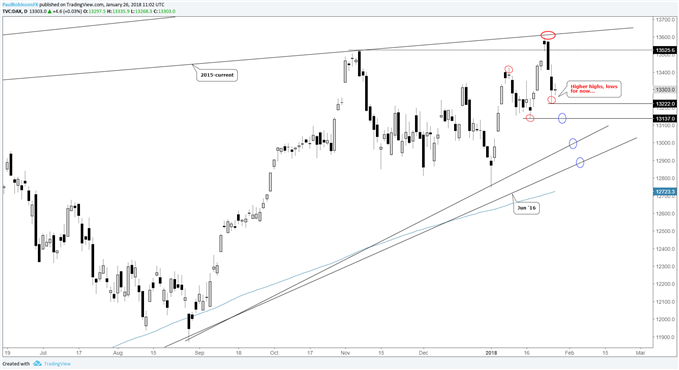