Find out where our analysts see the DAX and Euro ending the year in the DailyFX Q4 Forecasts.

Last week, when we looked at the DAX we were discussing the double tailwind in place for major European markets, strong global risk appetite for stocks and a weak euro. Both of which went from supportive to destructive as stocks, globally, are in retreat mode and EURUSD isn’t making good on the topping ‘head-and-shoulders’ pattern. More on the euro in a bit…

The Nikkei, which was the biggest upside impresser in recent weeks, put in an extremely violent turnaround day last week after a ~20% run. It is likely to rest or keeping pulling back for now. U.K. stocks have been weak since the FTSE 100 failed to cross over the 7500-area with any real conviction for the fourth time since June. In the world’s largest stock market – the U.S. – the S&P 500 has been a hold-out, but showing signs of vulnerability as discussed in yesterday’s webinar.

Getting to the technical picture in the DAX, specifically, it’s at a bit of spot here as it breaks down through the top-side trend-lines extending over from peaks in 2000 and 2015. This top-side slope proved problematic for much of last month before the German benchmark launched higher on the 10/26 ECB meeting. It was big resistance, but not looking to be big support right now. The area right around 12900 marks the bottom of that multi-week consolidation then, and also the prior June record high. This will be important to hold. This week.

With the DAX outside of the nice neat upward sloping channel lines off the August low, a failure to turn higher and willingness for dip-buyers to step in aggressively would be a warning sign that we are in for a deeper retracement, with the mid-12600s in focus. 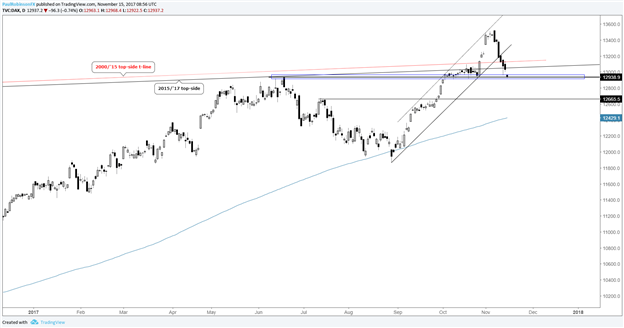 Keep an eye on the euro, it’s in the process of completely wrecking the ‘head-and-shoulders’ top it began dropping lower from on the ECB meeting. The crossing above the trend-line off the September high is a sign that more momentum may be on its way. With the one-month inverse correlation of the euro to the DAX sitting at -85%, the single-currency's impact is not going unnoticed. 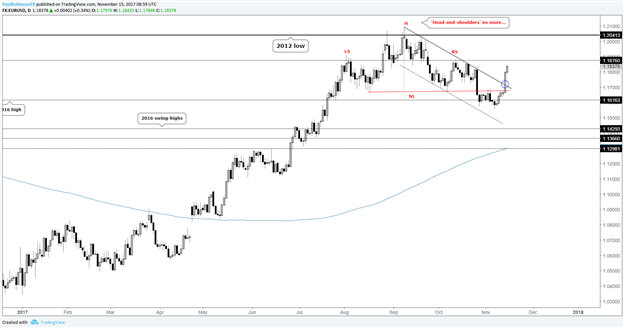 Bottom line: If we see weakness out of global stock markets and a failure for buyers to soon show up along with further strength out of the euro, the DAX could be in for a bit of a tough stretch.