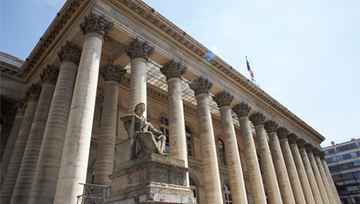 Find out in the DailyFX Q4 Forecastshow our analysts see the remainder of the year playing out for major markets.

The euro is weak and in a precarious position with it having recently broken down out of a ‘head-and-shoulders’ top, a pattern break which may or may not break, but for now it’s working and that is what matters. The weak currency situation isn’t the only boon for Europe. It helps that the Nikkei is now trading at levels not seen since January 1992. It’s growth of legs has been profound, as the index is now up over 19% since September 8. The world’s largest stock market, the U.S., seemingly notches a new record high every day or so. The FTSE is treading water in record territory. The bottom line, global equity markets are strong to quite strong and equals strong underpinnings for European equities.

The DAX is grinding higher at the moment after rising sharply out of the October consolidation period. It’s certainly extended and not the easiest market to buy, but not a market yet showing signs of wanting to go lower, either. The upper parallel tied to the trend-line off the 8/31 low put a cap on the advance on 11/1, but it didn’t have much impact from a resistance standpoint – the index is still floating higher. The market could test it again soon and this time pull off, but a dip will be viewed as an opportunity to join the trend higher, not begin a shorting campaign.

The CAC is currently consolidating right at a top-side trend-line extending over from the 2015 peak across the May high. The DAX had a similar line of resistance which proved to be a hurdle to overcome, but with the aforementioned forces in place it looks likely it is just a function of time before the line is crossed. Support comes in on the trend-line off the 8/31 low and the May peak of 5442. 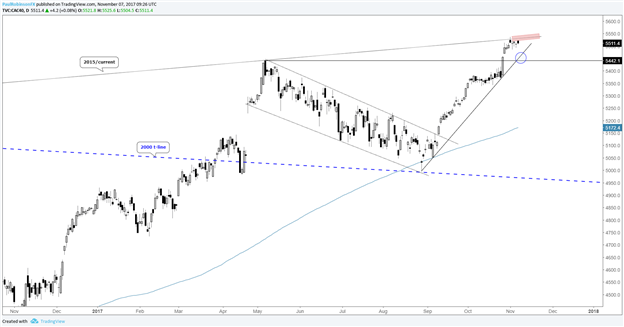