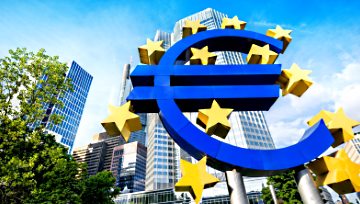 DAX Consolidating or Topping? ECB May Determine Its Fate

Find out what’s driving the DAX and Euro in our Q4 Forecast.

Lately, we’ve been discussing a pair of top-side trend-lines standing in the way of the DAX advancing to new heights. They are both long-term in nature, with one very long-term; 2000-present, the other crosses from the 2015 peak over the June high. Both aligning in the same proximity of 13000/100.

Since early this month the index has undergone a period of consolidation right at these lines, which either meant we could see a follow-through trade to the top-side trend-lines or a breakdown from the consolidation pattern. A drop through 12909 will undermine the period of digestion and likely lead to an extended move lower towards the next level of support at 12676, a swing-high created back in July. If the DAX can continue to maintain and move beyond the aforementioned trend-lines then the benefit of the doubt will remain with the trend and longs. 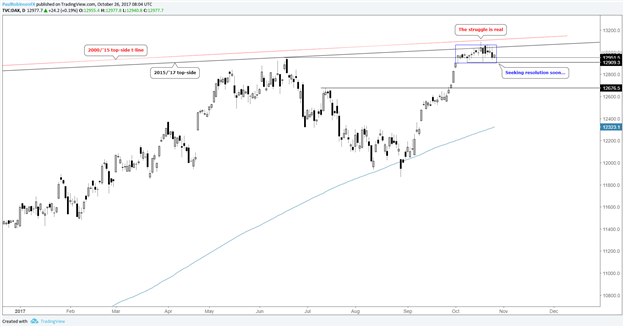 Check out this guide for tips on Building Confidence in Trading

Today could be pivotal…

At 11:45 GMT time, the ECB is widely anticipated to extend its current QE program, but is expected to reduce the amount of the monthly bond purchases by half to €30b. The press conference with Draghi begins at 12:30 GMT. Volatility is likely to be subdued if the central bank acts inline with expectations, but any significant deviations from the expected could give a sharp rise to price swings in the DAX and euro. The swings will almost certainly come in opposite directions. It’s worth noting, however; the strongly negative correlation seen recently between the single-currency and major European indices (1-mo. correlation of DAX vs. EURUSD was nearly -90% earlier this month) has diminished and even turned slightly positive when looking back over the past month. Is the diminishing impact of the euro here to stay, or will we see it exert itself once again on the direction of the DAX?

In any event, the consolidation pattern if not soon broken to the upside could turn out to be a topping formation, and with major long-term trend-lines standing in the way this wouldn’t be surprising. Keep an eye on 12909.