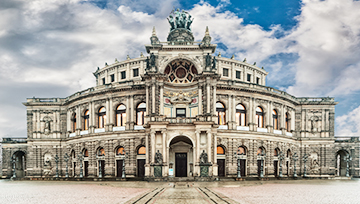 Find out in our Q3 Forecast what’s driving the DAX and Euro.

In Tuesday’s post, we discussed the positioning of the DAX as remaining bearish, with the ‘head-and-shoulders’ top having triggered and the French election gap on the verge of filling. It was that same day we saw the DAX put in a fairly strong bounce, popping back above the neckline of the H&S formation and testing the top the of the election-gap. But that was where it all ended as now the German index is working its way towards a gap-fill and likely sub-12k soon.

The trend is undeniably weak since hitting a record high in June, the weakest of major global indices at this time. The euro continuing to press on to two-and-half year highs is certainly not helping the cause for investors. The correlation between the DAX and euro is a strongly negative 87% over the past three months. For traders, the trend higher in the euro, lower in the DAX has provided opportunity in a low-volatile global market environment. It’ll be interesting to see if the strong relationship between the two will persist should we see a turn in the euro (As we discuss regularly in webinars, correlations can get turned on their heads without warning.)

Getting back to the chart, the DAX cash index only has a little distance to drop before filling the French election gap at 12048. The next level we’re looking to, though, really comes in under 12k at a swing-low in April at 11941, followed up by the 200-day and March low in the 11870/50 vicinity. As we’ve said before, the measured move target for the H&S formation isn’t until 11630, but it’s actual price not derived levels which we are most interested in. How the DAX responds should it test those levels will be the tell as to whether we are in for a much broader move lower or an abbreviated drop from a bearish topping formation. 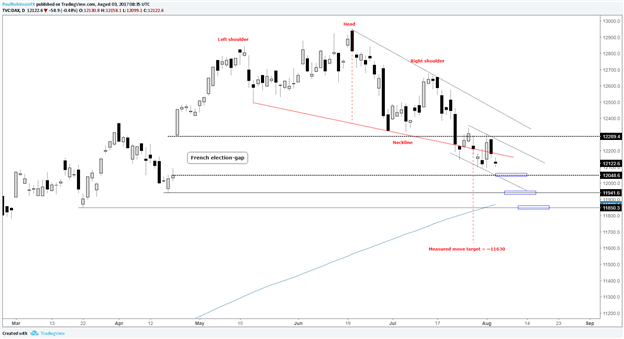