Since we last discussed the DAX on Friday there isn’t a lot to add – it’s at the apex of a nearly two-month old rising wedge. It could break any day now. These patterns can be explosive, especially when a break lower happens, catching market participants leaning on the wrong side of the trend. The thinking on this end is that if we see an upside breakout there is a higher than normal risk of a failure. An outcome we won’t predict, but rather react to. Initially, we will run with the break higher and adjust accordingly should the market come apart. A downside break could also result in a fake-out breakout, but less likely (at least based on our experience).

And of course, what goes for the DAX also generally goes for the CAC as well. It’s coiling a bit differently, but a well-defined rising wedge has taken shape in France. The apex arrives at a very interesting point. CAC is right up against the trend-line running down off the 2000 record highs over the 2007 and 2015 peaks. All very important inflection points, especially the former two. Obviously, this makes for a potentially significant make or break point. A turn lower below the bottom-side of the rising wedge would validate trend-line resistance and likely lead to a swift decline. On the top-side, should we see a squeeze out of the pattern above the trend-line (weekly close preferred given long-term time-frame) could lead to an aggressive move higher. In either event, a big move could be just around the bend. 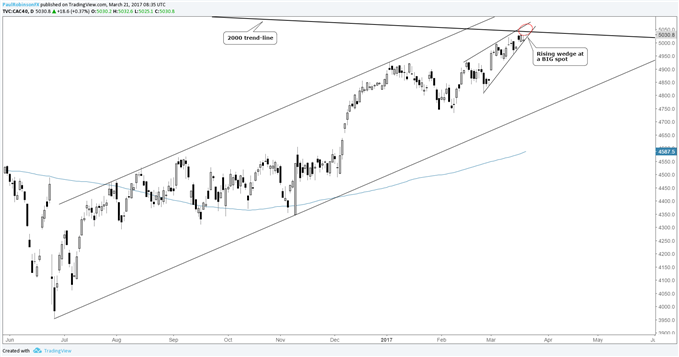