DAX: Stall and Fall from Here? Keep an Eye on the U.S. Market

To receive Paul's analysis directly to your inbox, please sign up here.

On Monday, the DAX turned up from noted support in the 10400s and attempted to push firmly above an upper parallel running back to August. The attempt was unsuccessful as the market came close to the 9/22 high and reversed about 125 points, resulting in a bearish key reversal day.

The U.S. markets entering into the equation in afternoon trade helped bully the DAX lower. For those who have been reading regularly, we have had our eye on the S&P 500 for indication as to which way markets may want to move globally. Yesterday, the S&P took its first steps towards breaking free of the narrowing trading range it had been stuck in for weeks. The break lower, however, brings an important trend-line off the Feb 11 low into play. Immediately. Will it hold or fold? U.S. markets have been the strongest for a while now, so how things play out here will be an important determinant in the direction of global markets moving forward.

Getting back to the DAX…

The index is becoming ‘boxed in’, ‘wedged up’, or whatever you want to call it; between the rising trend-line off the June lows and the upper parallel going back to end of summer. There is also good support in the 10440/510 area running back as far as September of last year.

The impressive gap-and-trap on 9/30 and the subsequent sideways price action since suggests there is a bid to the market, but the slightly bearish downward trend structure since the middle of August (lower highs/lower lows) tells us the market could stall and fall from here. If US markets, which have been the strongest, begin cracking lower, then the DAX should also begin its descent below noted support and continue its bearish sequence of lower highs and lower lows.

But before we run out and start hitting bids, we need to first see that important support zone (10440/510) cleared. It’s support until it isn’t. On the upside, we will want to see a clean break and close above the upper parallel and move above the 9/22 peak at 10705, along with U.S. markets turning back to the upside. At which time the DAX will still have its work cut out for it, but odds of seeing new 2016 highs will begin increasing markedly. 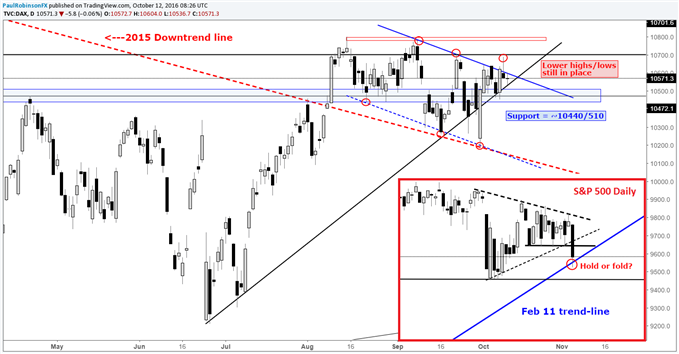 Find out where DailyFX analysts see markets headed in the final quarter of the year. Get our FX, indices, and commodity forecasts right here.