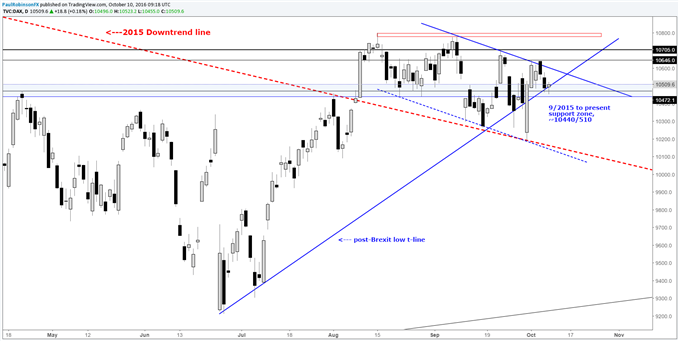 When we looked at the DAX on Thursday, we noted the first level of resistance near 10646. The gap higher on Thursday printed 10641 and turned out to be the high of the day, with minor weakness setting in since. During the past couple of sessions, the index is trading around the trend-line off the June lows, which was breached and recaptured on Sep 30 when rumblings surrounding Deutsche Bank saw to a large gap lower and impressive fill.

In addition to the trend-line, there is support in the 10440/510 area going back as far as September of last year. We will watch to see if the DAX can hold this band as support on the current retracement of the impressive gap-n-rip rally back on 9/30. It’s the first area of support, and the only truly visible one from a pure price standpoint (i.e. excluding Fibonacci, MAs, etc.) until the gap-day low at 10190.

Overall, the index is a tough read at this time – choppy conditions exist not only with German stocks, though, but globally as a whole. Last week, we made mention of watching the S&P 500 for cues as the index continues to coil up and looking primed to make a move. We’re still waiting on that to unfold.

Going back to August, the DAX is putting in a slightly bearish sequence of lower highs and lower lows, albeit not in an orderly fashion; it could simply be backing-and-filling of the post-Brexit rally, though, readying itself for another run higher. We will have to wait and see before becoming committal from either side of the tape. Keep an eye on the current area of support for further clues. A hold and break above the top-side parallel would be a bullish event, while a break below the floor would mean a deeper retracement or worse is unfolding.

Check out the DailyFX Q4 market forecasts in our trading guides section.