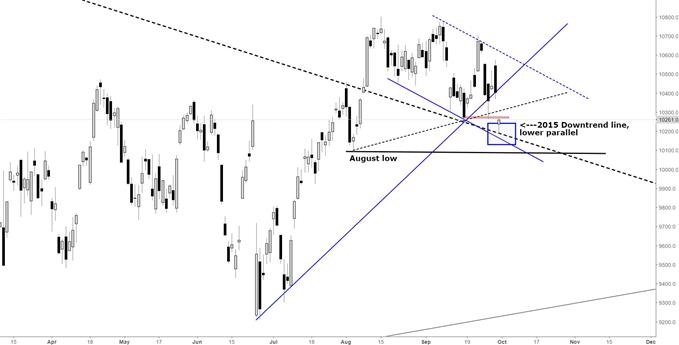 When we looked at the DAX yesterday we were discussing its movement towards the convergence of the trend-line off the post-Brexit lows and a set of parallels developing over the past month or so. This put us in a position of feeling as though it would be best to wait for a break of either side should price action further converge towards the intersection between the technical events.

Deutsche Bank is at it again, getting hammered this morning on fears of the bank’s ability to stay properly capitalized (down ~7% at this time); the entire banking sector across Europe is under pressure in sympathy. We won’t go into great detail regarding the DB situation, but we will say this: for those operating on time-frames beyond the intra-day, be cognizant of the overnight risks, even if you are trading off primarily charts. For those who are day-trading, the volatility is a very good thing.

Speaking of the charts…

Today’s sharp gap lower has the DAX below the eyed June to present trend-line, prior September low, and the trend-line extending back to early August. But before we write the index off, we are trading down near the back-side retest of the broken trend-line off the 2015 peak, and with less importance, near the lower parallel running back to the middle of August.

This is an important spot for the market to bounce from and sustain. It will be challenging as the trend structure and market jitters are not providing a favorable environment. If the DAX can mount a strong recovery from today’s lows and close anywhere near unchanged, it could mark a significant inflection point in market sentiment. It’s not looking like the most likely scenario at the moment, but one worth keeping in mind should we see market participants shrug off the big, bad news.

In the more likely event we don’t see a full recovery unfold, we will use the 2015 trend-line and lower parallel as key support, with the August low at 10092 as an important pivot point. A break below there and the 10k mark could see the DAX begin to unravel quickly. We will discuss that at a later time should it become relevant. Resistance on trade higher comes in at the 9/16 low at 10262, then the early August trend-line around 10300, and above there the market has a little room to run.

To receive analysis from Paul directly via email, please sign up here.