- EUR/JPY remains strong around the psychological level of 130.00 ahead of tomorrow’s ECB rate decision.

- The Euro’s bullish run of 2017 will face its most critical test tomorrow as investors go into the rate decision looking for some element of clarity around the ECB’s future plans around stimulus. If the ECB announces a plan or strategy for stimulus exit, Euro strength will likely continue as investors attempt to get in-front of any potential policy tightening that may follow.

- Want to see how Euro, and Yen have held up to the DailyFX Q3 Forecasts? Click here for full access.

In our last article, we looked at the bullish structure in EUR/JPY as the pair continued to find buyers around the key Fibonacci level of 128.52. As we had shared, this is the 38.2% retracement of the ‘Abenomics’ move in the pair, and after re-emerging as a key level in EUR/JPY’s price action in June of this year, this price had continued to elicit support. But this hasn’t been an entirely one-sided story: After breaking above 130.00 in July, EUR/JPY has had difficulty mustering fresh buyers when testing new highs, leading to about a month’s worth of digestion as a megaphone pattern has begun to show. 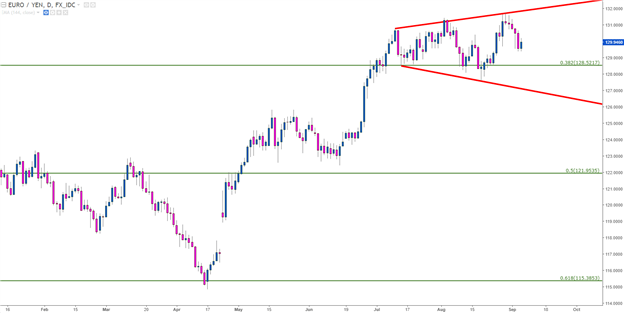 Megaphone patterns are rather unique, and they can show up near the top or bottom of a move as traders continue to test either side of a range ahead of a big break. Unfortunately, this includes zero predictive power as to which direction the break may actually take place; and the reason that these patterns may show near tops or bottoms likely has to do with the bigger picture sentiment or trend showing at the time.

The key driver for the Euro’s bullish move in 2017 has been expectations around the European Central Bank. As we came into the year, the ECB was in the midst of a massive stimulus program that was set to run all the way to December of 2017. But as we moved deeper into the year, and as growth and inflation data in the Euro-Zone continued to show signs of improvement, expectations began to build that the ECB would start to walk away from their outsized stimulus outlay after the current program expires in December.

Tomorrow brings an ECB meeting in which the bank will provide fresh projections, and this will be the last set of forecasts that we receive before that December meeting around when the current stimulus program will be wrapping up. This has led many to believe that we may get that next piece of information as to what or how the ECB wants to handle the matter moving-forward, and this has kept the single currency strong as buyers attempt to front-run a potential stimulus exit from the ECB. But is this something that the ECB wants? And further – if they do actually announce a stimulus exit at tomorrow’s meeting and if Euro-strength continues, what can they possibly do quell the rampant demand that has continued to show?

Regardless of which way tomorrow’s rate decision drives prices, the current megaphone pattern can be used to direct near-term positioning. A top-side break of resistance around 131.70 is bullish, while a bottom-side break of prior support around 127.50 is bearish. After a breach of either of these levels, traders can then direct their focus to looking for lower-high resistance around 128.52 for short-side continuation approaches, while a bullish break opens the door for higher-low support around 130.50-131.00. 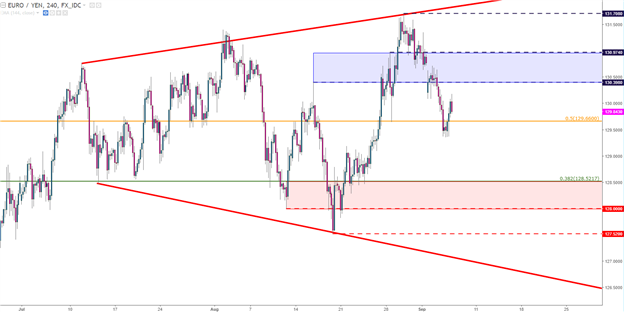