- The U.S. Dollar is under pressure again, and this week brings a series of highly-important drivers around both the Euro and the U.S. Dollar.

- The next three weeks are loaded with Central Bank rate decisions that will likely garner considerable interest. The ECB is on Thursday, the Swiss National Bank and BoE are next week, and the Federal Reserve is the week after.

- IG Client Sentiment remains elevated in EUR/USD, with a current read of -2.06 while GBP/USD is currently showing -1.11.

Last night, we heard from the Reserve Bank of Australia as they kept rates flat for the 13th consecutive meeting, and tomorrow brings the Bank of Canada for a rate decision where there is a realistic possibility of a hike. This marks the start of the Central Bank rate decisions that will drive global markets over the next three weeks. On Thursday, we’ll hear from the European Central Bank at a long-awaited meeting in which the bank may actually begin to step away from their massive stimulus outlays; and next week brings the Swiss National Bank and the Bank of England. In the week after that, we hear from the Federal Reserve and many are expecting to get some type of announcement as to what the Fed plans to do with their $4.5 Trillion balance sheet. And in the background of all of this Central Bank activity we have the brewing situation in North Korea, which will likely remain highly unpredictable. But given the market’s proclivity to display brief bouts of risk aversion as new developments take place in that developing situation, it bears mention as this is a factor that traders have to remain cognizant of.

Also of note – we will be hearing from Fed officials before the start of the ‘blackout period’ ahead of the September rate decision. This week brings Lael Brainard, Robert Kaplan, Neel Kashkari and William Dudley, all of whom are voting members and commentary from each can certainly prod the Dollar in either direction. Below, we look at three of the more pressing themes across FX markets as we begin this round of Central Bank rate decisions.

Will the Dollar Find Some Semblance of Life?

It’s been a brutal 2017 for USD. And just when it looked like the Dollar might be ready to snap those strings of losses, another driver comes in wipes it all away. This is what we saw towards the end of August, where DXY spent most of the month showing signs of higher-low support. But the one-two combo of Yellen and Draghi at Jackson Hole towards the end of the month that eradicated those hopes for USD-strength, and another fresh round of worries around North Korea helped to drive ‘DXY’ down to another new 2.5 year low to start last week.

But after that 2.5 year low printed on Monday/Tuesday, the Dollar began to trend-higher in a rather consistent fashion, eventually running up to find resistance on the under-side of a prior bullish trend-line.

U.S. Dollar via ‘DXY’ Hourly: Last Week’s Resistance Off of Prior Support 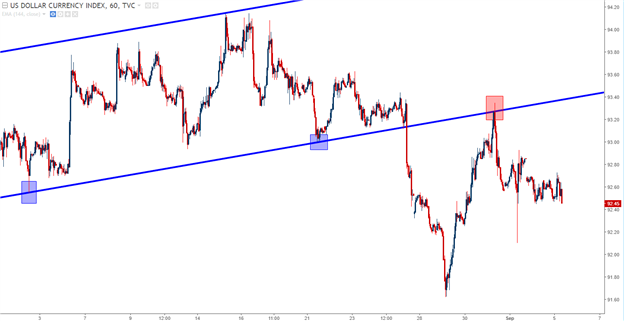 After retaining somewhat of a bullish short-term posture going into last week’s Non-Farm Payrolls report, sellers took over after a disappointing print; but it’s what happened after that which was most surprising, as buyers showed-up to pick prices-up right after the print, and since then we’ve seen support develop around the 50% retracement of last week’s bullish move. 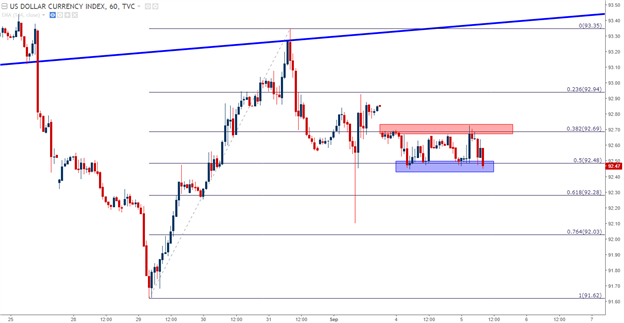 This is yet another piece of evidence into the extreme oversold nature of the U.S. Dollar. This can present a bit of friction with continued short-side positions, so traders will likely want to be very picky about choosing their spots to sell USD. One potential option is the Euro, as discussed below.

Will the ECB Wave the Red Flag in Front of Euro Bulls?

While the Dollar has been getting crushed for most of 2017, the Euro has been running-higher, much to the ECB’s chagrin. As we came into the year riding the wave of the reflation trade, hopes for stronger growth and inflation around-the-world kept risk markets bubbling. But as we’ve waded deeper into the year, growth and inflation remained strong in Europe while dwindling in the United States. This has kept the single currency strong under the expectation that the ECB will need to investigate tighter policy options before too long, and after the first round of French elections resolved with a rather market-friendly outcome, there has been a near-constant onslaught of buyers trying to get in front of any potential stimulus exit from the bank.

But at each turn, the bank has demurred. When asked point-blank if the ECB had investigated stimulus exit at the April rate decision, Mario Draghi said the bank hadn’t even discussed the idea. The same thing happened in June, and after each, Euro bulls cooled their jets for a couple of weeks before another round of USD-weakness/Euro-strength took over. But in July, after a similar question was met with a very similar response from Mario Draghi, Euro bulls didn’t wait around as they bid the currency up to fresh highs. At Jackson Hole, Draghi didn’t even touch monetary policy, instead choosing to use his speech to discuss income inequality and the benefits of open borders and immigration; but markets seemed to care little as they just continued to buy the Euro up to fresh 2.5 year highs. 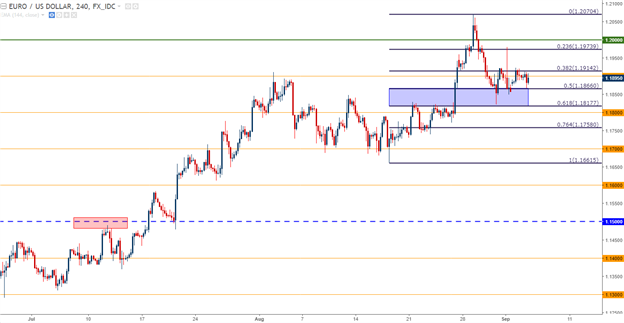 Last week finally brought some respite to that bullish trend. EUR/USD moved down to a zone of support that we’ve been following, and then began to trend-higher again. But bulls aren’t displaying the same element of enthusiasm that they were even two weeks ago, and this is likely because we have that really big event on the calendar from the ECB in two short trading days.

The big question here is whether we get a deeper retracement. Sentiment has gotten very bullish in the single currency during this year’s run, and retracements are running very shallow. The ECB will likely not wave the white flag and just give up, allowing Euro bulls to run amok with the currency. While they may not have many options, expect the ECB to take the most dovish possible approach that they can, and if this can stall or slow-down that bullish trend, a deeper retracement could allow for a more attractive entry point for longer-term positioning. 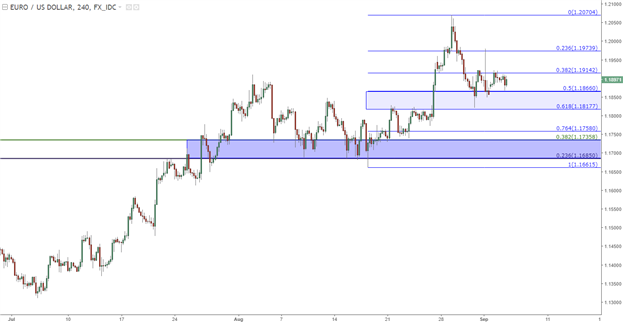 Will the USD/JPY Range Hold?

While the Dollar has been dropping like a rock against most major currencies over the past five months, USD/JPY has remained relatively range-bound. This pair has displayed high sensitivity to the North Korea situation, so this is still worth watching from traders and market participants. If the North Korea situation intensifies, expect Yen strength as risk-aversion bets price-in to markets. The big question here is whether this five-month range holds or if that Yen strength may actually elicit a break-lower in the pair. 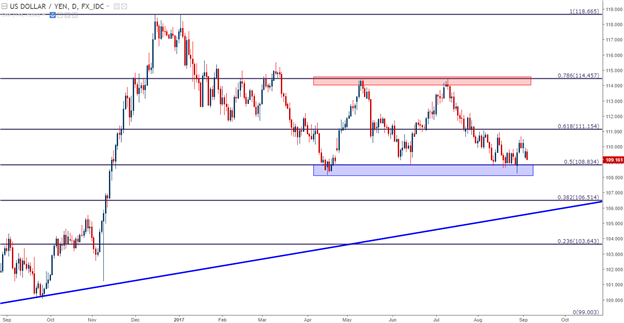