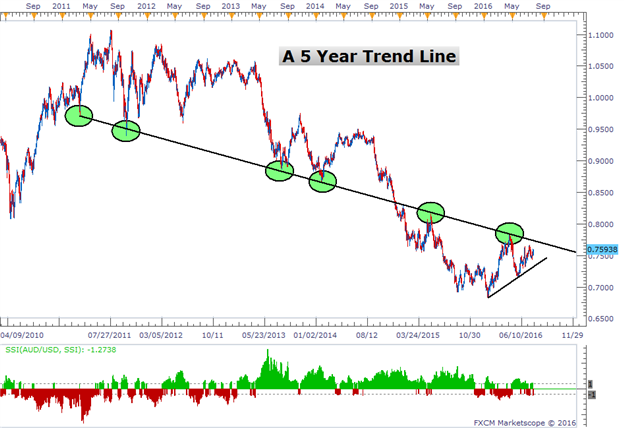 -Near term and medium term patterns in AUD/USD are bearish against .7678

-Above .7678 creates higher highs and a break above a 2 year trend line

The sprint higher on AUD/USD today gives it an impulsive look and may be the last gasp prior to a sell-off. The key level to the topside is .7678. A move above here would create a series of higher highs while pushing through a longer term trend line in place since 2011 (image 1). A move above the 78.6% retracement level near .7631 is an early warning signal that prices may push on above .7678 and into new recent highs.

The shorter term and medium term outlook using Elliott Wave theory is for prices to fall from nearby levels while holding below .7678.

Previously, we wrote how AUD/USD was ripping into a reversal zone. A reversal zone it was, though the subsequent sell-off at 240 pips was much smaller than we were anticipating.

The price action since the July 27 low appears to be a zig zag. If this is the pattern, then a top may be looming nearby while price hold below .7678. This zig zag may put the final touches on green wave 2 which carves as a double three complex correction (see image 2 below). 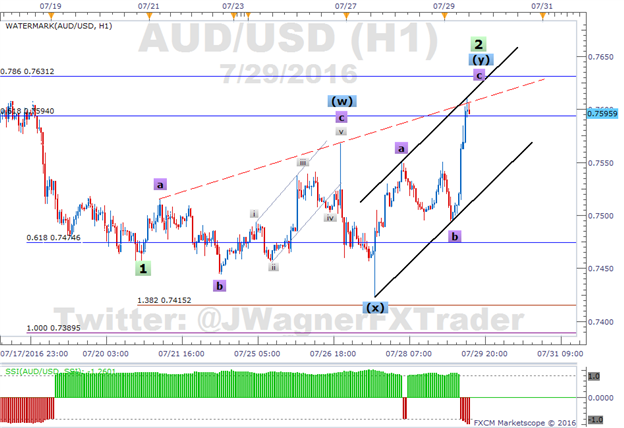 Assuming this is the pattern the market is carving, then it suggests a wave 3 lower. Wave 3’s tend to be the strongest and longest and would carry initial targets near .74 with secondary targets near .7250. There are even lower levels for longer term traders we outlined here.

Sentiment is turning negative for AUDUSD which hints that a couple more pokes higher may still be left in the pair.

Bottom line, the short term and medium term bias is bearish so long as prices remain below .7678. The bearish outlook targets .74, .7250, and .70. On the other hand, a successful move above .7678 would create a higher high while punching above a long term trend line.

Ripping Into the Reversal Zone (AUDUSD)