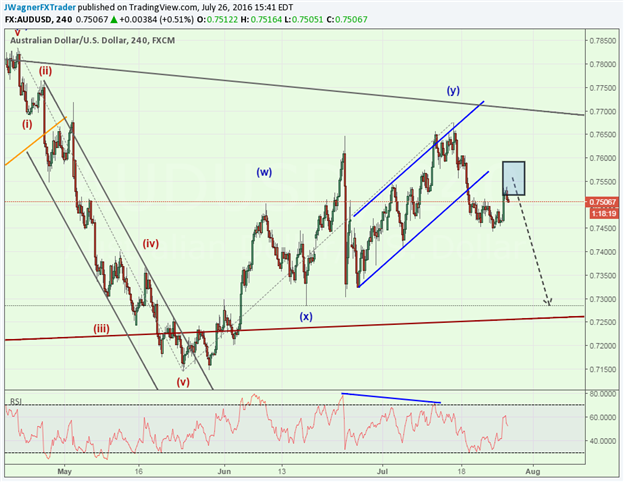 -Near term and medium term patterns are bearish against .7678

AUD/USD has finally pushed up into the bearish reversal zone. We have been anticipating this bump higher as recent as Friday. The .7520-.7600 level was highlighted on Friday as a zone which may represent the final leg of a bullish push. It is possible we may see one more high above .7545, though it is not required as the previously bullish pattern can now be counted as completed.

The top side key level to watch under this analysis is the July 14 high of .7678. A move above .7678 threatens the near term wave picture, though the medium term outlook would remain bearish.

On a successful move lower we have horizontal support and trend line support near .7285-.7300. The next level of support is .7150.

Based on the Elliott Wave count, we are anticipating a sustained move down towards .70 and possibly .65 as AUDUSD would be falling in a 3rd wave that began on July 15. We previously noted :

“If this outlook holds, then AUD/USD would be at risk of falling hard in a 3rd of 3rd wave lower. Third waves tend to be the longest and strongest of the Elliott Wave sequence.”

With Sentiment, measured via SSI, clocking in at +1.06, that means there is about 50% of the traders who are going to be on the wrong side of a trade. With news event risk heavy over the next 24 hours (namely Australian CPI coming out later today and FOMC concluding their two day meeting tomorrow), this could create a knee jerk reaction that catches many AUDUSD traders off guard.