Back on January 3, 2019, we argued the case for a multi-year bull market in USD/JPY. To date, the price action for USD/JPY using Elliott Wave Theory supports the longer-term bullish view.

We are tracking a bullish 5-3 wave pattern for USD/JPY. This is where you have a 5 wave motive wave to start a new trend followed by a three wave partial retracement.

The motive wave began on January 2, 2019 and carried to March 5, 2019. From there, a sideways flat pattern carved in three waves labeled (a)-(b)-(c). The wave structure from the May 13 low appears to be a leading diagonal pattern. If this interpretation is correct, then another large rally may begin soon. 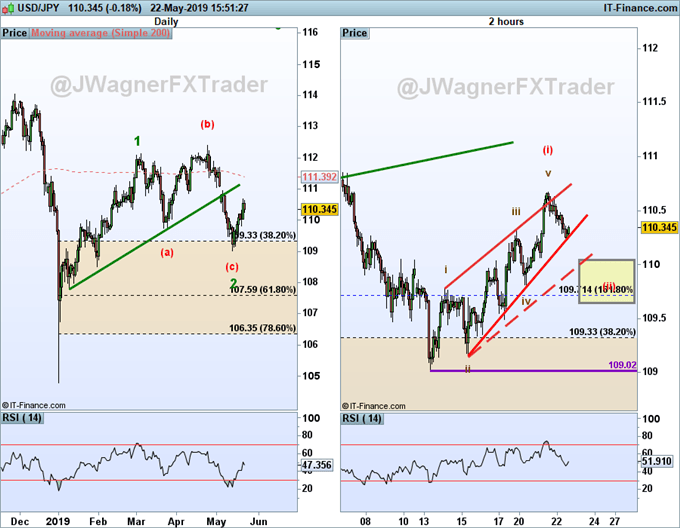 The USD/JPY daily price chart (left image above) labels the larger degree of trend in green. We believe that wave ‘2’ finished on May 13 and wave ‘3’ is in the beginning stages towards higher levels. Initial wave relationships appear near 117 and 120. As we argued in the January 3 report, even higher levels are under consideration.

Therefore, we are considering the current Elliott wave for USD/JPY to be wave (ii) of 3.

In the near-term, if USDJPY prices fall below 109.02, then we will need to reconsider the wave count. However, the longer-term view remains valid with USDJPY above the January 2 low.

Elliott Wave theory is a trading study that identifies the highs and lows of price movements on charts via wave patterns. Traders analyze the waves for 5-wave moves and 3-wave corrections to determine where the market is at within the larger pattern. Additionally, the theory maintains three rules and several guidelines on the depth of the waves related to one another. Therefore, it is common to use Fibonacci with Elliott Wave analysis. We cover these topics in our beginners and advanced Elliott wave trading guides.