You might be interested in
Markets Week Ahead: Event Risk Trading Strategy
Register for webinar
Join now
Webinar has ended

This time, the gamble paid off. When former UK Prime Minister Theresa May took her Tory party to a general election in June 2017, the results were a disaster: a slim majority in UK parliament relying on an alliance with Northern Ireland’s DUP. The entire Brexit process went into disarray, and fears of a no deal, hard Brexit exploded.

Current UK Prime Minister Boris Johnson learned from the failings of his predecessor. UK PM Johnson’s Conservatives were able to post their best election result since the days of Margaret Thatcher, while Labour’s historic loss has seen their share of UK parliament fall to its lowest level since 1983.

Having campaigned on the slogan “Get Brexit Done,” it’s now the top priority of UK PM Johnson to usher his Brexit deal through UK parliament by the January 31, 2020 deadline – the deadline established after the UK missed its October 31, 2019 Brexit date. Thereafter, Phase 2 of Brexit begins: the trade negotiations with the EU.

The most important outcome of the UK election is that the overwhelming majority support that UK PM Johnson now enjoys means that his Brexit deal, which barely fell short in UK parliament back in October, is now very likely to proceed.

In the near-term, the elimination of no deal, hard Brexit fears has helped volatility to collapse in the British Pound. Like other asset classes such as bonds and stocks, currencies associated with higher volatility tend to underperform. Heightened volatility in FX markets typically means greater uncertainty around monetary and fiscal policy. 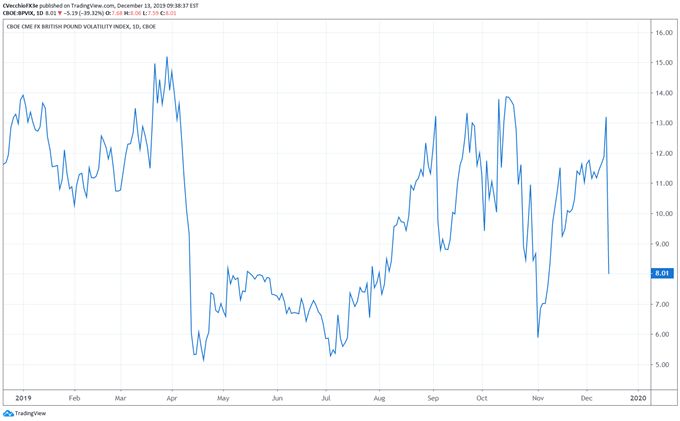 British Pound volatility (as measured by the Cboe’s GBP/USD volatility ETF, BPVIX, which tracks the 1-month implied volatility of GBP/USD as derived from option chains) was trading at 8.01; ahead of the UK election, it was trading at 13.20. The path to Brexit is now clear, meaning uncertainty over the near-term policy path for the British Pound has been eliminated in a meaningful way. 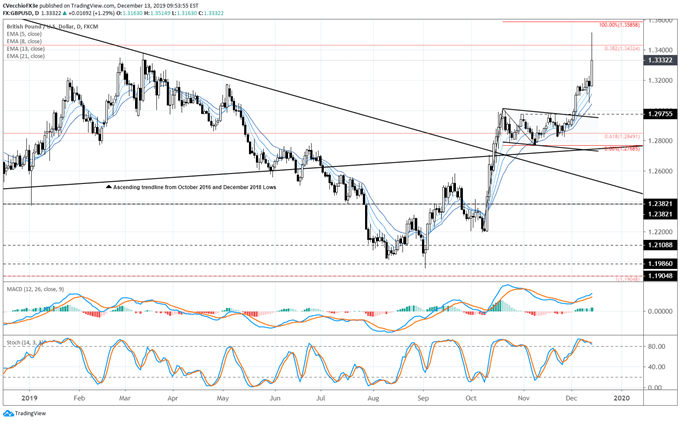 In our last GBP/USD rate forecast update, it was noted that “more gains may be ahead...should UK PM Johnson win a strong majority, further gains towards the 38.2% retracement of the ‘post-Brexit vote trading range’ at 1.3432 can’t be ruled out.” With his commanding majority, UK PM Johnson’s victory helped propel GBP/USD rates to their highest level since May 2018, hitting a daily high of 1.3515.

Momentum remains incredibly strong given the scale of the day’s move. GBP/USD rates are extending further above their daily5, 8-, 13-, and 21-EMA envelope. Daily MACD is trending higher in bullish territory while Slow Stochastics are nestled in overbought territory. The GBP/USD rally looks ‘long in the tooth’; a move below the daily 5-EMA would signal the recent move higher may be finished in the near-term (currently 1.3213). 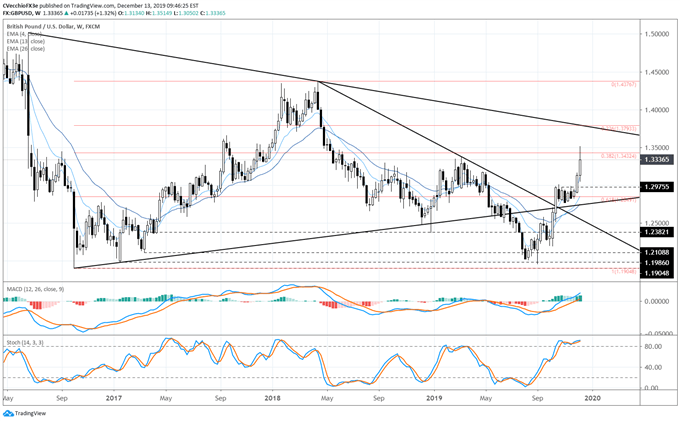 GBP/USD remains above the weekly 4-, 13-, and 26-EMA envelope, while weekly MACD continues to trend higherin bullish territory and Slow Stochastics are holding in overbought territory. GBP/USD continues to hold above the ascending trendline from the October 2016 and December 2018 lows, as well as the descending trendline from the April 2018 and March 2019 highs. The weekly timeframe still points to potential for more gains, although the 38.2% retracement of the ‘post-Brexit vote trading range’ at 1.3432 may now be considered meaningful resistance. 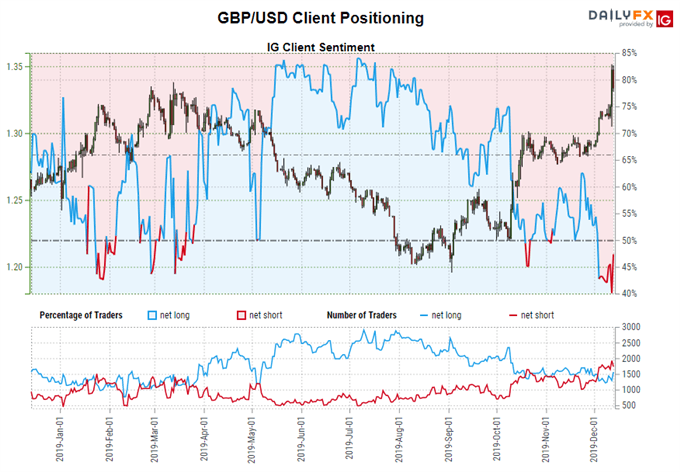 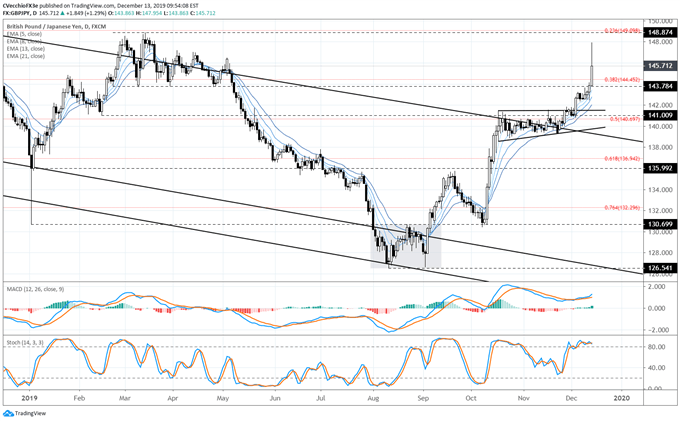 In our last GBP/JPY rate forecast update, it was noted that “GBP/JPY rates in recent weeks has morphed from a symmetrical triangle into an ascending triangle; in context of the move higher in October, both consolidations favor topside resolution…but for the UK general election (which can upend all technical expectations), the GBP/JPY profile is evidently bullish.”

GBP/JPY’s triangle has indeed broken out to the topside, having cleared the 38.2% retracement of the 2016 to 2018 low/high range at 144.45. GBP/JPY rates are trading well-above the daily5-, 8-, 13-, and 21-EMA envelope. Daily MACD is trending higher in bullish territory while Slow Stochastics are holding in overbought territory.

The GBP/JPY profile remains bullish; a move below the daily 5-EMA would suggest the near-term uptrend is exhausted (currently 144.03). 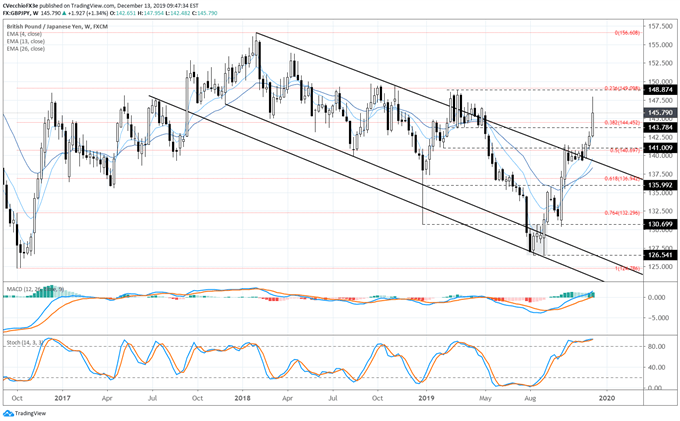 The weekly timeframe is more bullish for GBP/JPY than the daily timeframe – although the wicks on the weekly candles showcase the considerable overhead resistance. GBP/JPY rates are still completely above the weekly 8-, 13-, and 21-EMA envelope, which remains in bullish sequential order.Weekly MACD continues to advance above its signal line into bullish territory,while Slow Stochastics are sustaining their elevation in overbought territory. Longer-term bullish potential has not dissipated despite the lack of progress on the daily timeframe. 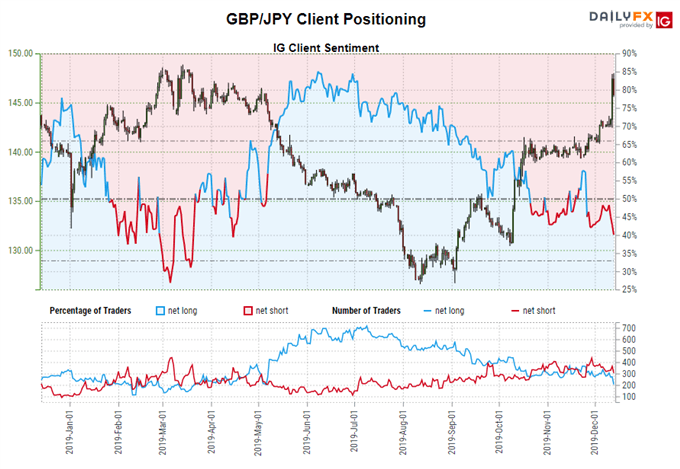 We typically take a contrarian view to crowd sentiment, and the fact traders are net-short suggests GBP/JPY rates may continue to rise. Traders are further net-short than yesterday and last week, and the combination of current sentiment and recent changes gives us a stronger GBP/JPY-bullish contrarian trading bias. 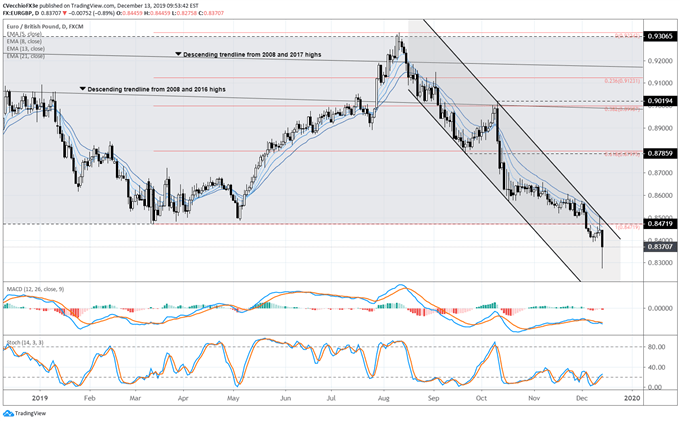 In our last EUR/GBP rate forecast update, it was noted that “EUR/GBP rates continue to remain within the downtrend from the August and October highs, but now EUR/GBP rates have dropped below 0.8460/80, an area that held up as support going back to May 2017. Now, post-Brexit trading range lows may come into focus closer towards 0.8300 over the coming weeks.” EUR/GBP reached a low of 0.8276 earlier today.

The momentum profile remains bearish, with EUR/GBP rates below the daily 5-, 8-, 13-, and 21-EMA envelope while daily MACD is declining in bearish territory and Slow Stochastics are holding near oversold territory. 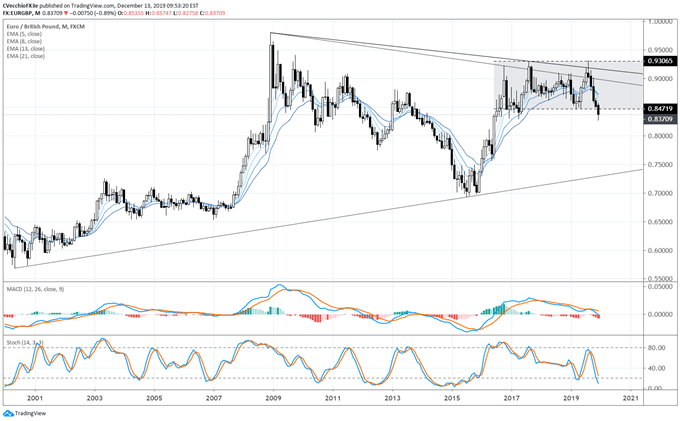 After three years, there may be a meaningful break occurring in EUR/GBP rates. For several months, it was noted that “a move below 0.8472 would suggest a significant, longer-term top has developed in EUR/GBP rates.Until the 0.8472 to 0.9307 range breaks – until there is a clear shape of Brexit – traders may find themselves less anxious simply by staying away from EUR/GBP.”

On the monthly timeframe, momentum continues to shift lower. Monthly MACD is trending lower below its signal line, while Slow Stochastics have started to reach oversold territory turned lower (in bullish territory as well). Now that there is a clear shape of Brexit,we’ve now entered the territory where a major top may be forming and it’s time to engage EUR/GBP. 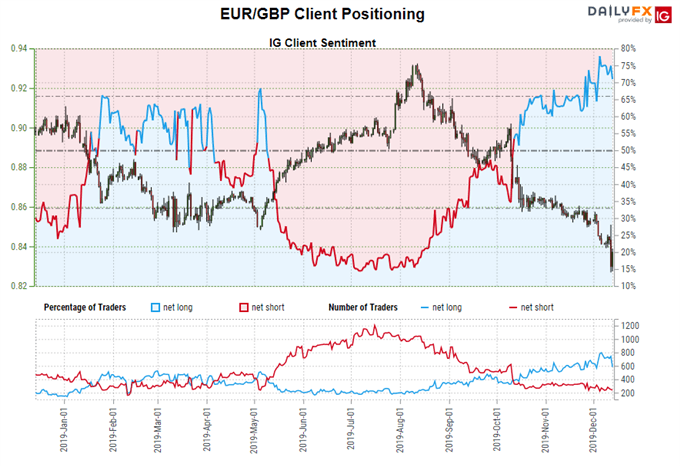