Crude started the week positively, trading closer to the yearly high. Since then the commodity dropped by around 4.3% (at 14:00 GMT) but dropped as low as 5.5% from the daily Monday close. The recent volatility around OPEC + and continuing calls from US President Joe Biden for the cartel to raise output levels faster than they have planned, saw oil move 5% on Thursday before closing just beneath its opening level to end the day relatively flat.

The Thursday and Friday candles interestingly enough showed a significant rejection of prices lower than $80 (observed by the extended lower wicks) and Friday saw a concerted move well above the previous low at 81.95. This move adds to the bullish narrative suggested by the bull flag, which has encapsulated the larger pullback thus far.

The bull flag is just one of many technical patterns that play out in financial markets. Head to our Education section to learn more

Depending on the weekly close, 80.00 remains the major level of support which could move up to 81.95/82.00. Initial resistance 82.80, followed by the upper bound of the descending channel before a retest at 86.67 (which coincides with the 161.8% Fib of the July – August move) is considered. 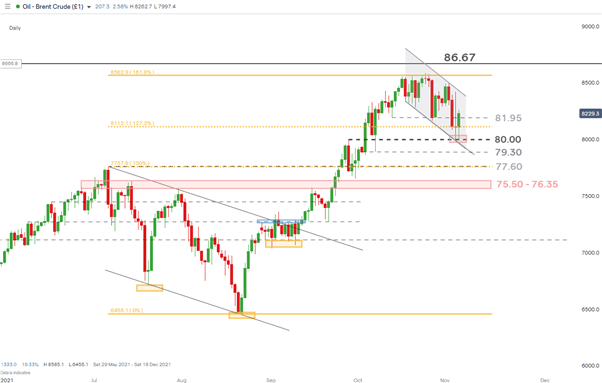 From a historical perspective, oil is nearing a significant level that has provided numerous inflection points in the past and that is the 8667, or near the 8670 mark for those preferring a more convenient, rounded figure. If we are to see significant bullish momentum and potential break above this level then there is very little standing in the way before the commodity reaches $100.

Its crucial to note that both times we saw a break above this level (in the last 17 years) the bullish momentum that followed was relentless with little or no consolidation. However, Oil prices have come off somewhat after the yearly high in October so we would need to see a validation of the bull flag with a rather consistent move higher after breaking above the ‘flag’. 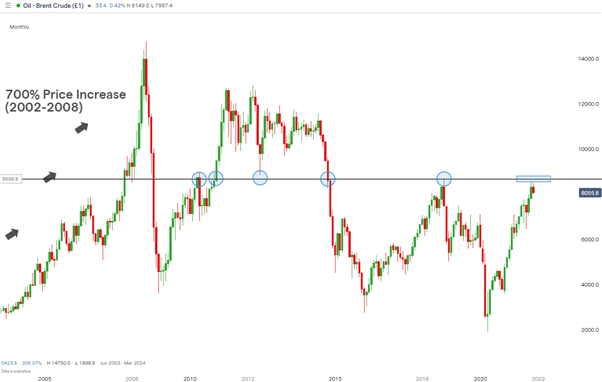 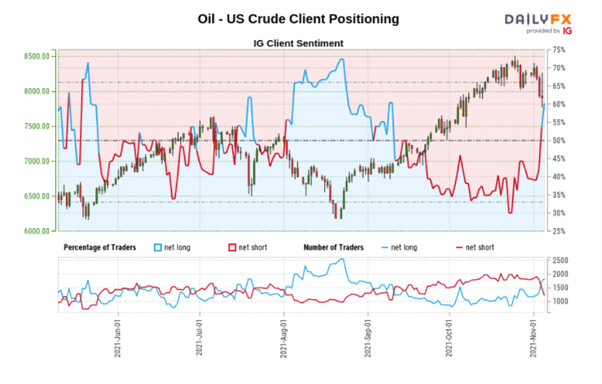