After putting in a recent high at 10.3135 from October, EURNOK traded lower in following months to test a prior area of support at 9.8281 before moving higher. The cross marked its highest point since December 12 early Tuesday prior to moving lower and now sitting at 10.0491.

Today’s price action is setting up an inverted hammer candlestick, potentially signaling a reversal of the bullish trend formed over the past week. The downturn is paired with an overbought indication when looking at the relative strength index, now dropping below 70. Follow-through lower will see price action meet the 200-day moving average which currently sits at 9.9382, which could offer support.

However, the 50-day moving average is pulling down and near to crossing under the 200-dma, which would form a death cross. Traders may look to the nearest area of recent support/resistance at 10.0164 to be tested before taking a position to confirm follow-through. 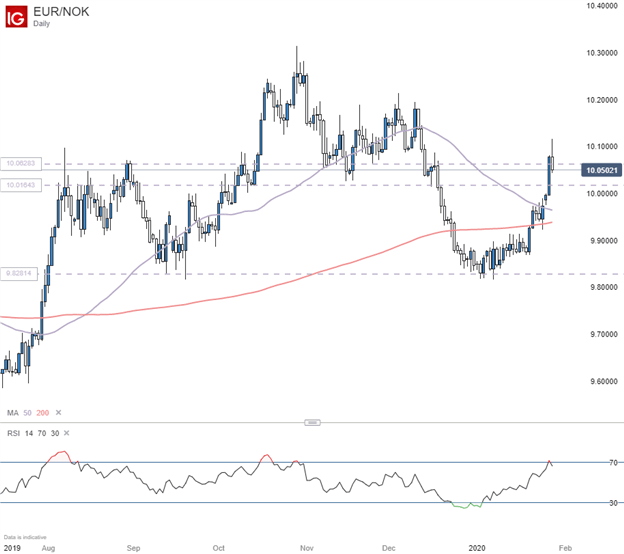 Currently EURSEK is in a similar standing to EURNOK. The cross has seen bullish strength in recent weeks after putting in a bottom from December. Tuesday’s price action reached 10.6214, the highest mark since November 25. However, the cross met resistance at the 200-DMA and currently sits at 10.5897. Looking ahead, if prices move lower in the coming days, a prior area of resistance set through January could offer support to keep the bullish trend intact. 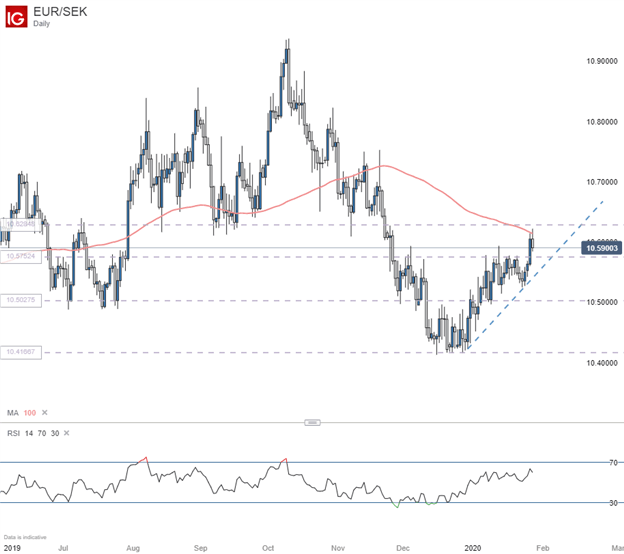 The Euro saw a reversal of strength in recent months against the NZD as the pair fell from a 2019 high of 1.7701 before putting in a recent low of 1.6619 on December 27. Since then, the Euro has struggled to gain significant ground against the New Zealand Dollar. However, the cross has managed to make several higher lows since its March 26, 2019 bottom of 1.6289.

Though there is this series of higher lows formed throug the past year, there have been several step drop-offs from highs, preventing a clear trading channel from forming. Should the recent pattern continue, traders may look to explore potential bullish trading opportunities when the cross approaches its most recent low. 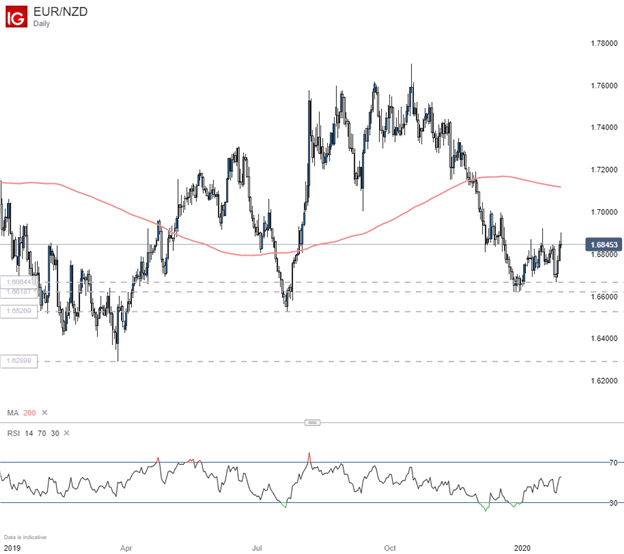