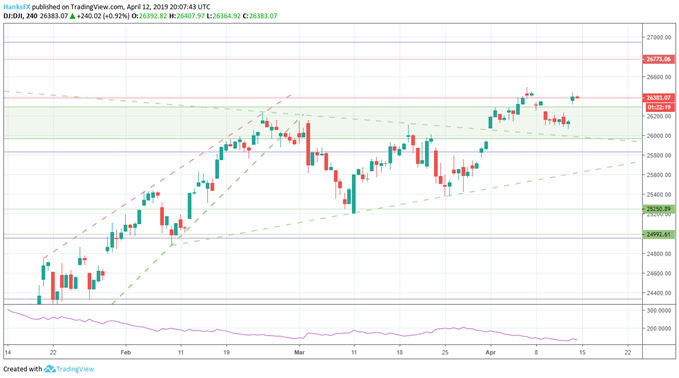 The Dow Jones gapped higher on Friday as a notable component of the Industrial Average – Disney – soared to all-time highs. With a daily close above the recent band of resistance at 26,295, the index should now look to use the level as support. Beneath that lies a support trendline from October that recently acted as the topside of a wedge from February to its break on April 1.

With considerable support beneath the index, the topside shows promise. Apart from the swing high on April 5 at 26,490, immediate resistance is less clear. That said, 26,773 – September’s high – should offer some resistance before the Average tests record highs at 26,942.

Similarly, the S&P 500 gapped higher at Friday’s open on positive earnings from JP Morgan, Wells Fargo and PNC Bank. In turn, the index ran to topside a resistance trendline dating to December 24. Price action has been wrapping around the line like a vine, suggesting it still holds some sway. It will pose the first top-side barrier for a move higher in the week ahead.

Beyond that, horizontal resistance at 2,916 – September’s high – is another risk to a move higher. Should both topside levels be beaten, the final hurdle is the index’s record high at 2,942. As far as support is concerned, the S&P 500 has ample. Prior resistance at 2,870 from the high in February 2018 should now offer buoyancy on an attempted move lower, followed by March’s high at 2,860. 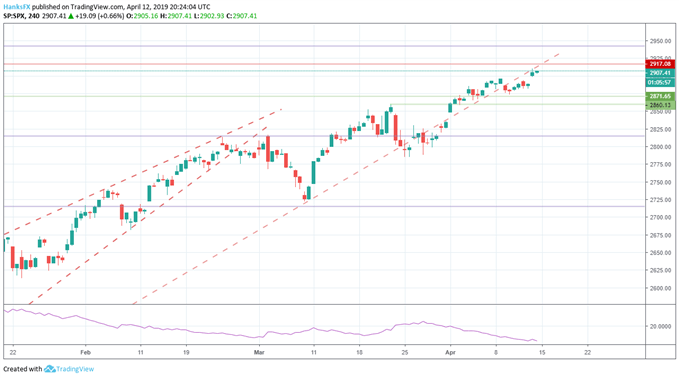 The German DAX 30 finds itself on the topside of its upward channel from January. Given the positioning of the index within its channel, and its stellar run-up two weeks ago, consolidation or a minor retracement may be needed before another topside test is attempted.

The channel’s upper bound appears to be the sole resistance, with the index’s current price marking the high during a period of consolidation amidst October’s rout. Should the index open above 12,000 on Monday, the level could offer some buoyancy during the week. 11,841 marks another October high and lies in an open gap from two weeks ago. In the week ahead, it should provide some support if it is tested before the lower-bound of the channel. 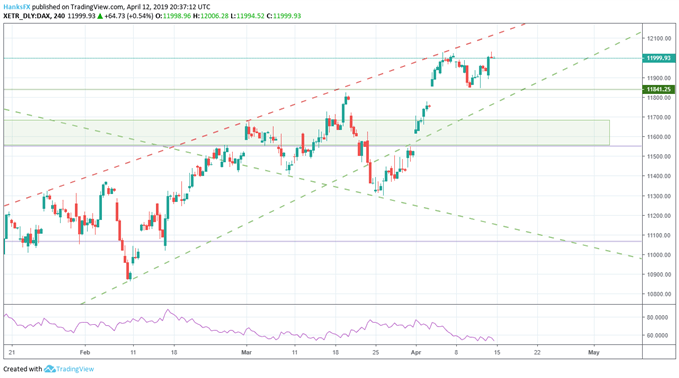 The FTSE 100 closed Friday’s session slightly beneath trendline resistance from mid-February. Although the line has been broken in prior sessions, it provided clear-cut resistance during Thursday and Friday trading which suggests it should continue to do so next week. It will be the first barrier to a topside move.

For support, the index will rely on the 61.8% Fib level at 7,382. Beneath that lies a support trendline from December 24 lows which has not been broken since its inception. Like the DAX, the FTSE may look to consolidate above the 61.8% Fib level before another test at topside resistance. A daily close above the line would see it act as support as the week progresses. For more equity technical levels, follow @PeterHanksFX on Twitter. 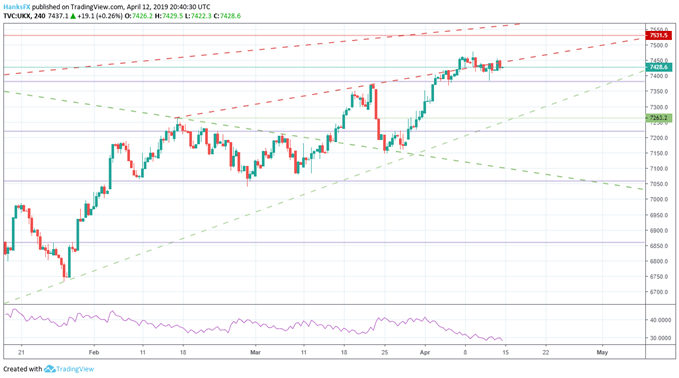 US Dollar Forecast – USD Searches for Direction Amidst Wedge