AUD/USD, AUD/CAD Prepare for Next Big Moves as AUD/JPY May Reverse

This past week, the Australian Dollar struggled to add to its gains versus the Dollar, starting with the dramatic 'morning star' from the beginning of the month. However, AUD/USD remained wedged in-between key horizontal range support and resistance levels noted last week. The former is within an area of 0.71452 and 0.71645 while the latter is about 0.72255 to 0.72466.

As the pair aimed cautiously lower last week, a Pennant pattern formed (see chart below) which is typically a continuation pattern. The large candlestick created on January 4th acts as the flagpole and the beginning of the formation. If prices push above the descending resistance line of the Pennant, AUD/USD may resume its near-term uptrend. But that requires confirmation.

A push above resistance would expose the December 2018 highs between 0.73572 and 0.73935. On the other hand, a turn lower opens the door to testing early January price levels. Keep a close eye on the 4-hour chart to monitor the rising support line of the Pennant. Until it is clear which direction AUD/USD chooses in the coming days, the technical outlook will have to be neutral.

In addition to AUD/USD, the two most interesting Aussie-crosses this week are AUD/CAD and AUD/JPY. Every week, I will be conducting a poll to pick which other two Australian Dollar crosses to cover. You can participate in the poll by following me on twitter @ddubrovskyFX as well as to see timely updates on the Aussie Dollar. 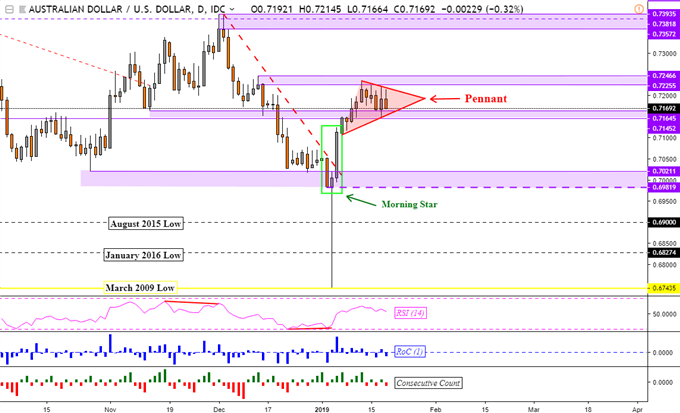 Like AUD/USD, AUD/CAD aimed cautiously lower last week. The pair has been struggling to make further upside gains after the formation of a Head and Shoulders bearish reversal pattern during the last few months of 2018. But, the Australian Dollar is confined between key support and resistance levels against its Canadian counterpart.

The former is a rising trend line from October 2018 marked as a red line on the chart below. The latter is a descending range of resistance dating back to December 2018. The pair is running out of room to consolidate in-between these prominent barriers and it may be on the verge of making its next big move. Ascending through resistance opens the door to testing 0.96696. A push lower has the 2016 low at 0.93266 eyed.

Until a breakout is made in either direction, the AUD/CAD technical outlook will look neutral. 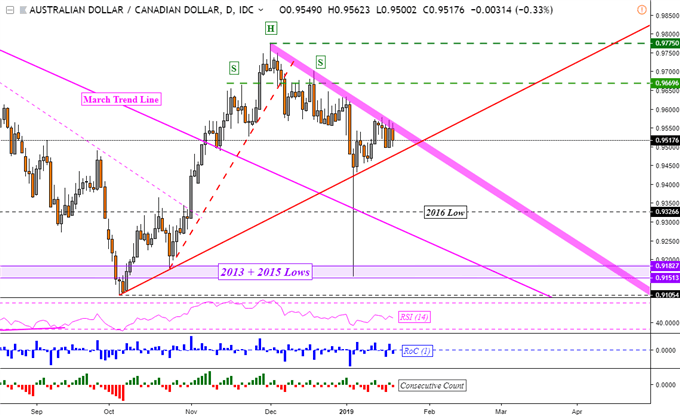 As anticipated, AUD/JPY pushed higher into a major area of resistance pointed out in last week’s technical forecast. This occurred after a break above a descending resistance line from December 2018. The rising trend line from 2008 also behaved as resistance until it was breached towards the end of last week. However, a range of former support in-between 78.69 and 79.05 held.

In fact, AUD/JPY struggled climbing through the latter and as a result of a last-minute pullback, a Shooting Star candlestick pattern formed. This does indicate indecision and if the pair aims lower in the days ahead, we may be in for a bearish reversal. This would have support eyed around 75.24 next which is the January 4th open/January 3rd close.

Meanwhile continuation of the near-term uptrend would have the next area of resistance eyed which is a horizontal range within 80.62 and 81.14. Until AUD/JPY picks a direction, the technical outlook will look neutral. 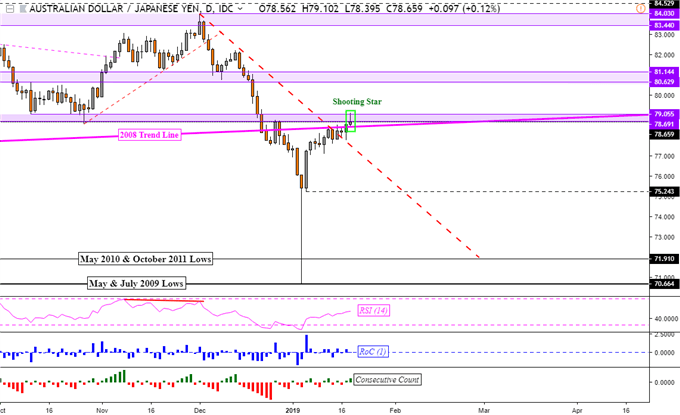