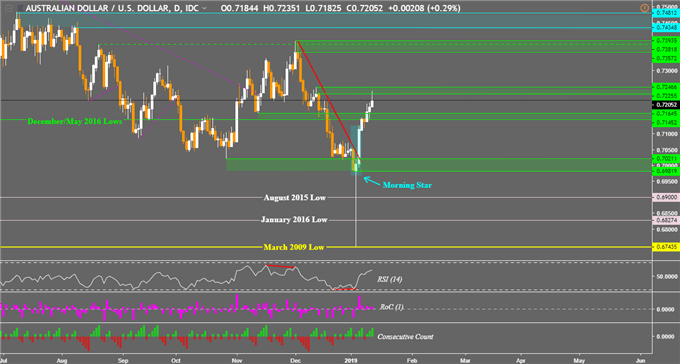 Have a question about what’s in store for Australian Dollar next week? Join aTrading Q&A Webinar to ask it live!

Last week, I noted multiple technical hints that the Australian Dollar was about to achieve notable gains against its major counterparts. This was particularly true for AUD/USD prices, which rose about 1.25% over the past 5 days after a Morning Star candlestick pattern was confirmed after pushing above a near-term descending trend line. Fading downside momentum also preceded the pair’s turn higher.

That is represented via positive RSI divergence on the immediate chart below. So where does this leave the Aussie Dollar from here? First, the pair blew through former horizontal support now resistance between 0.71452 and 0.71645. But, there was not enough upside momentum to breach the next resistance barrier between 0.72466 and 0.72255.

If that area is cleared, AUD/USD may very well be on its way to retest early December 2018 highs. The outer boundaries of resistance there is around 0.73935. Meanwhile immediate support appears to be the December/May 2016 lows around 0.71452. The forecast remains bullish.

On a side note, I am now hosting weekly polls on Twitter to see which Aussie pairs (in addition to AUD/USD) want to be covered in my weekly technical forecast. This week’s most popular choices were EUR/AUD and AUD/JPY. You may follow me on twitter @ddubrovskyFX to participate as well as for more immediate updates on how the Australian Dollar is behaving.

After a couple of bearish reversal warning signs in EUR/AUD, the pair declined about 0.56% after struggling to push through stubborn support as anticipated. 1.59855 was finally breached last Friday and that has opened the door to potentially reaching the lows achieved in early December 2018. But getting there requires overcoming a couple of obstacles.

Immediately in the way is 1.58806 which has on multiple occasions stemmed either gains or declines since June 2018. Pushing through that area opens the door to testing the support thereafter around 1.57141. A descending resistance line from the beginning of this year is also guiding the Euro lower against the Australian Dollar. A break above that would open the door to a turn higher. But, the forecast remains bearish. 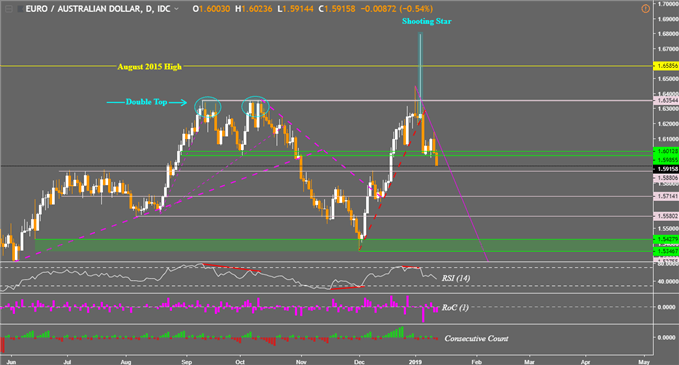 Like what we witnessed in AUD/USD, AUD/JPY also aggressively rose. But unlike AUD/USD, this pair has a difficult road ahead to extend gains. This is because it is just below a trio of major resistance levels. The first is a rising trend line from 2008. The second is a horizontal range in-between 79.055 and 78.691. The final barrier is a near-term falling resistance line from early December 2018.

Having said that, the pair may rise into the major resistance area (yellow ellipse on the chart below) and finish this week to the upside. But, until these barriers are breached, it will be difficult to argue that the pair is going to extend its bullish reversal technically speaking. Meanwhile support appears to be the January 4th low at 75.243. With that in mind, the AUD/JPY technical forecast will have to be neutral. 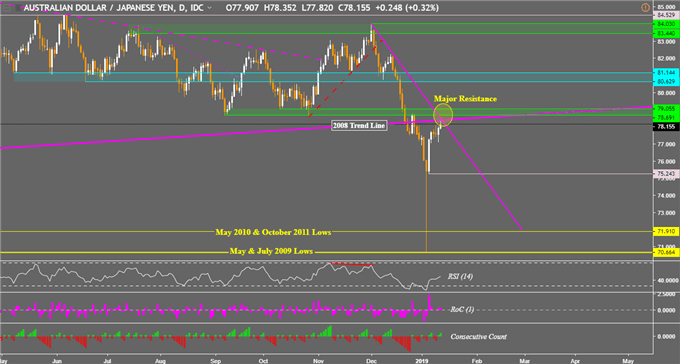