Yet again, the Dollar turned off a collision course with a key technical boundary this past week before a productive break could transition the benchmark from congestion to trend. The four-day slide through this past Thursday registered one of the longer bear runs we have seen from the ICE’s DXY Dollar index through 2018 – there have been two instances of 5-day retreats in January and August. While it is never wise to presume such performance observations are certain to predict imminent reversal, there is statistical relevance that shouldn’t be ignored. Calling a close to the otherwise reserved momentum of this past week’s slide would not only fit this historical trend, it would also align to a pause at the 100-day moving average and a trendline that can be labeled a ‘neckline’ on a head-and-shoulders position. In other words, a sustained decline would have signaled a significant breakdown which could be interpreted as a broader reversal effort. That is a loaded setup for a Friday when liquidity is draining conviction. What we ended with was essentially the ‘path of least resistance’ which sets us up again for speculative activity to once again build up pressure for any attempts at a break in the week ahead. 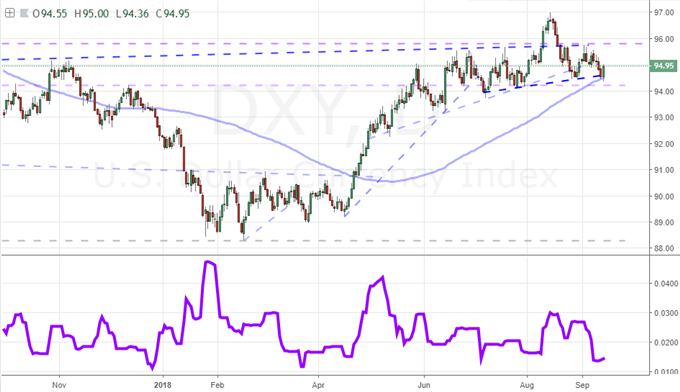 Given the level of market depth and momentum across the financial system, it comes as little surprise that traders were not ready to make a decisive move this past week. Looking at the individual currency’s activity levels, the 20-day ATR on the DXY is holding right in the middle of 2018’s extremes – the low coming off of early January’s holiday trade and high the February volatility explosion. A remarkable caveat is the range developed over the past 15 trading days (seen above) is one of the narrowest we have seen over that period of time since the Summer of 2014 – a period of exceptional quiet in both direction and activity levels. This happens to coincide with the ‘right shoulder’ on the aforementioned head-and-shoulders (H&S) pattern. The unusual duration of restraint suggests a break is likely over the second half of September. That is a more reliable probability. However, the implications of the H&S should not leverage conviction that it will conclude with a break support below 94.50. 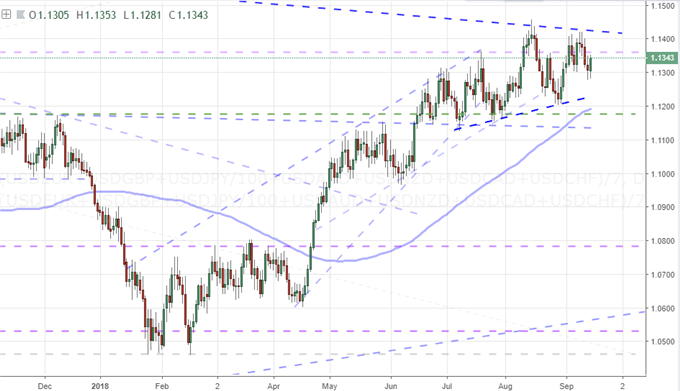 When looking at the Greenback across its various major counterparts – rather than the EURUSD-concentrated DXY – we find a similar H&S pattern still arises. Above is an equally-weighted Dollar index made of all the ‘majors’. From this depiction of the currency, we didn’t come close to the bearish cliff edge as was suggested with the trade-weighted index. Though we should keep tabs on these single-currency overviews, most speculative influence on the Greenback is through the individual pairs. If there isn’t a wider picture of a growing bearish storm surge, tentative technical breaks can quickly flounder and leave the markets tripping in less prominent but frustratingly effective restraint between 94.00 to 93.50. 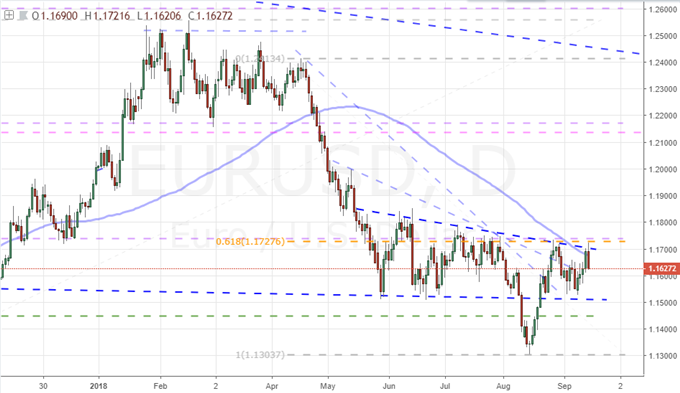 As much as the Dollar is best motivated with a universal move, there is no denying that high profile levels from key pairings can leverage heavier influence over the individual currency. EURUSD accounts for two-thirds of the turnover in the benchmark, so a driven technical break there could leverage capitulation elsewhere. Generally the mirror of the DXY, EURUSD was rebuffed from 1.1700 this past week and in turn held the line of the 100-day moving average and neckline of an inverted H&S pattern. Trading between 1.1700 and 1.1500 would signal limited intent from the speculative rank; but should volatility and/or volume pick up, be ready for a break.

See technical analysis on these other majors: