Previously, the Australian Dollar fell below key horizontal support against its US counterpart which left AUD/USD to target the 2016 low at 0.6827. However, the breakout was short lived as the pair pushed above a near-term descending resistance line from late August. In the final moments of last week, Aussie Dollar was then kept at bay by Fibonacci retracement levels and it remained stuck on the December/May 2016 lows.

Further closes above the descending trend line would have warranted a bullishAUD/USD technical outlook, but rather it will be a neutral one instead. At the moment, the Aussie would need further confirmation of a reversal to the upside via a close above the 38.2% Fibonacci retracement at 0.71985 followed by 0.72335. Getting above those would open the door to retesting the February descending trend line.

Meanwhile, AUD/USD would need to descend through near-term support in order to get a chance to close under the current September low at 0.70852. Doing so would once again reopen the door to eventually reaching the 2016 low at 0.6827. In the event the Aussie heads in that direction, traders should keep an eye on RSI to see if positive divergence ends up warning that downside momentum is ebbing. 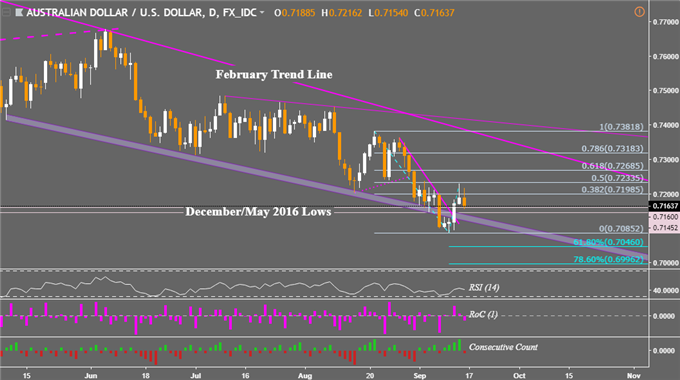 Meanwhile, one Aussie cross that does look quite vulnerable is EUR/AUD. Looking at the daily charts below, we can see that an evening star bearish reversal pattern has formed at the most recent top. This was also right on the rising range of former support now resistance from March 2017. We have also had a close under a near-term rising support line from late August.

This could eventually pave the way to retest the lows seen in August just above 1.5580. But getting there would involve clearing near-term support. Immediately ahead is the 23.6% Fibonacci retracement at 1.61717 followed by the 38.2% level at 1.60587. On the other hand, near-term resistance is the rising range followed by the September 11th high at 1.63544. 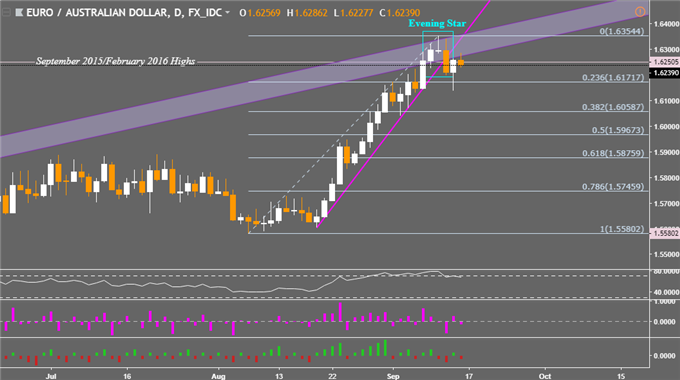 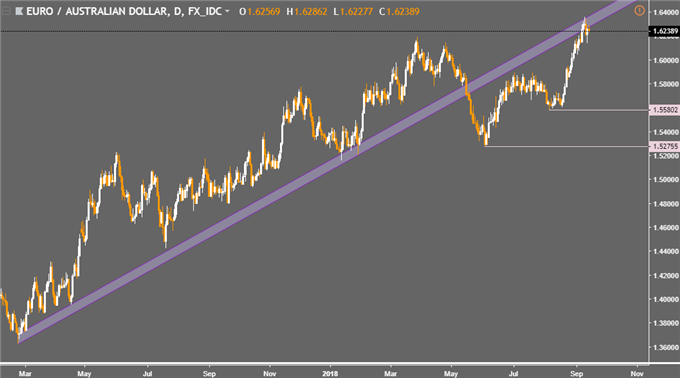