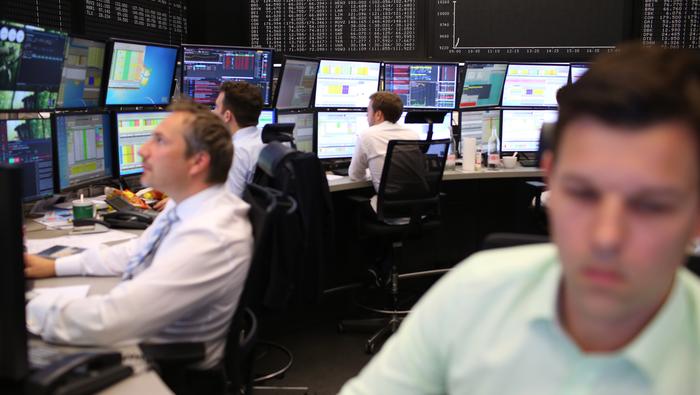 What is Earnings Season and What to Look for in Earnings Reports?

DAX 40: Selloff Continues Despite a Fall in Inflation Numbers

The Dax continued its selloff today with an eye on its year-to-date lows amid worries that the planned 11 to 21 July maintenance shutdown of the Nordstream 1 pipeline might be extended by Russia once it is supposed to re-open. Germany's annual rate of inflation fell in June, confirming the first estimate, as there was a respite because of temporary government interventions.According to final data released by German statistics office Destatis on Wednesday, consumer prices rose 7.6% on year measured by national standards, in line with the forecast by economists in a Wall Street Journal poll. In May, consumer prices rose 7.9%, posting the highest reading since December 1973. The respite may be welcomed but the German economy is far from being safe from recessionary fears like many of its Eurozone counterparts.

In Eurozone news, industrial production ticks up in May but the outlook remains bleak. Decent production growth in May seems to be driven by backlogs of work being fulfilled. Weakness for the coming months remains the base case as surveys indicate orders are dropping and supply chain problems continue to limit production.

Red dominates the sectoral breakdown with consumer cyclicals and basic materials leading the way, with losses of 2.53% and 1.56% respectively. 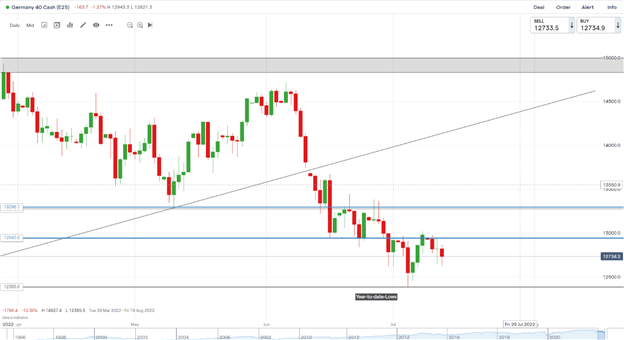 From a technical perspective, we continued to reject the psychological 13000 level yesterday, as we had a doji candlestick close on the daily and have continued pushing down today. Yesterday’s daily candle close strengthens the continued rangebound nature of indices in general as we tested the psychologically key level and the support area around 12600. Without a break below these two levels, rangebound trading may present the most effective opportunities.

The FTSE surrendered European session gains as US CPI dragged markets down. The UK economy grew strongly in May to the surprise of many, with gross domestic product rising by 0.5%, the best performance in five months, thanks to a 1.4% increase in construction output and solid rises in industrial and manufacturing output. Economists have warned that the UK still risks tumbling into recession even after an unexpected boost in activity in May.Paul Dales, Chief UK economist at Capital Economics, said: “It is far too soon to conclude that the economy will be able to get through this period of unusually high inflation largely unscathed. With real household disposable incomes set to fall further in the third quarter, a recession is still a real risk.”

The blue-chip’s sectoral breakdown is dominated by red with the only bright spark being energy with gains of 1.05%. 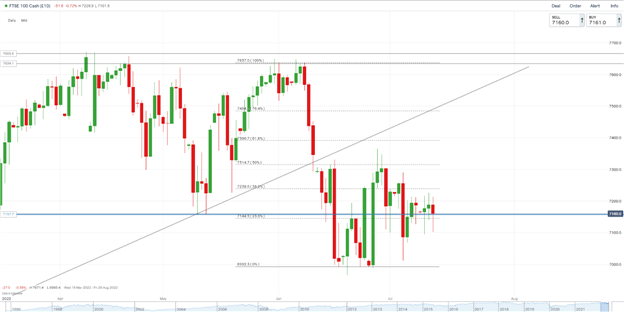 The FTSE closed last week as a hanging man candlestick signalling last week’s upside move may be short-lived. Yesterday we closed as a doji candlestick on the daily timeframe confirming the market's continued indecision. Nothing much has changed as the best opportunity at the moment rests within the range until we have a confirmed breakout and candle close (daily) above the 38.2% fib level or back below the 23.6% fib level.

DOW JONES: Tumbles on the Back of Red-Hot Inflation Numbers

The Dow tumbled after a hotter-than-expected inflation report bolstered speculation on aggressive Federal Reserve rate hikes. Data showed the June consumer price index rose 9.1% from a year earlier, the largest gain since 1981. Economists projected an 8.8% increase, based on the Bloomberg survey medians.

Corporate payouts are under pressure as companies grapple with fears of recession, historically high inflation and supply constraints.Investors fixated on the looming risk of recession are about to get a crucial read on a question that’s been burning a hole through markets for months: whether bank earningswill show cracks forming in the economy. Net interest income for the six largest US lenders is expected to rise by roughly 15%, while at the same time mortgage and investment-banking revenue are projected to decline, according to data compiled by Bloomberg.

The rest of the week’s events will be key if we are to see indices make a definitive move as we still have earnings due from JPMorgan, Morgan Stanley, Citigroup and Wells Fargo while US PPI and jobless claims are out tomorrow.

From a technical perspective, yesterday saw the price make an attempted retest of the 50% fib level before pushing lower. We did however close yesterday as an indecision candlestick just above our support area (grey box). Following the much-anticipated US CPI numbers, fundamentals may support a move lower finally retesting our pre-covid highs. This will depend on the daily candle close today as a close below resistance to keep downside pressure in play.