Most Read: What is Earnings Season & What to Look for in Earnings Reports?

Market Reaction Update at 9:00 AM ET

Immediately after the inflation report crossed the wires, U.S. Treasury yields spiked across the board on bets that the Fed will have no other choice but to raise rates forcefully in the coming months to tame sky-high price pressures in the economy. Meanwhile, risk assets took a turn for the worse, with the S&P 500 and Nasdaq 100 futures contracts erasing pre-market gains and plunging into free-fall. Looking ahead, tightening financial conditions, coupled with growing recession fears, may fuel volatility, preventing stocks from staging a meaningful and durable recovery. 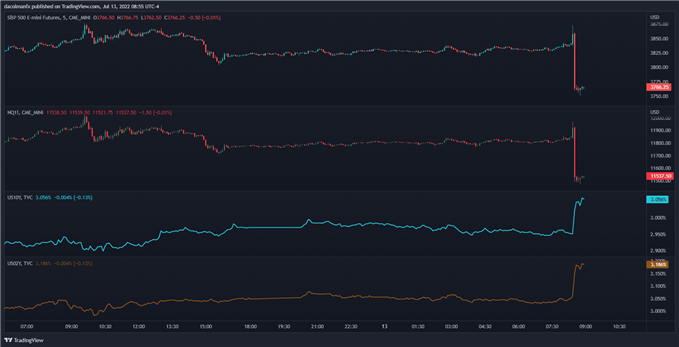 Inflationary pressures remained scorching hot last month amid soaring energy costs in the U.S. economy, giving the Federal Reserve cover to continue front-loading interest rate increases during the battle to restore price stability, a process that is sure to be protracted and bumpy considering the current state of affairs.

According to the U.S. Bureau of Labor Statistics, CPI, which measures the overall level of prices of a representative basket of goods and services purchased by Americans, soared 1.3% on a seasonally adjusted basis and 9.1% from a year earlier in June, topping estimates in both cases. Analysts surveyed by Bloomberg News had expected the headline gauge to rise 1.1% m-o-m and 8.8% y-o-y.

The annual inflation rate marked a new cycle high, quickening to the fastest pace since November 1981, nearly five times above the Fed’s symmetric 2% target, a situation that undoubtedly warrants raising borrowing costs above the neutral level and into restrictive territory expeditiously to prevent second-order effects from cascading and increasing risks to the outlook.

Examining the report’s details, the largest contributor to the monthly gain in the all-items index was energy. This expenditure category surged a whopping 7.5% on the back of a 11.2% spike in gasoline. There may, however, be light at the end of the tunnel. According to American Automobile Association (AAA), prices at the pump have declined for 28 consecutive days as of today, with the national average standing at $4.66/gal, down from a record $5.016/gal on June 14, a 7.2% drop.

With the energy expenditure category biased to the downside and soft commodities weakening across the board in recent weeks, price pressures should begin to moderate going forward, signaling inflation peaked at the end of the second quarter.

Excluding food and energy, so-called core CPI, which tends to reflect longer-running trends in the economy and reduce noise by stripping volatile components from the calculation, climbed 0.7% m-o-m, topping the median estimate by two tenths of a percent. Compared with one year ago, the indicator clocked in at 5.9% following a 6.0% reading in May, a slow but welcomed directional improvement.

Looking at the core gauge internals, shelter jumped 0.6%, reflecting robust gains in rent and lodging. Transportation, for its part, remained red-hot and spiked 2.1%, pointing to a rotation of household demand toward services consumption. Meanwhile, used cars and trucks soared 1.6%

While this may well be the hottest CPI report during the current cycle before a breather, there is no reason to believe the Fed will deviate from its immediate tightening plans or slam on the breaks. This means another 75 basis point hike at the July FOMC meeting is likely. Moreover, policymakers should retain a hawkish stance until inflation is demonstrably on the downswing.

In 2023, a policy pivot should not be ruled out, but that will ultimately depend on how consumer prices and economic activity evolve in the coming months. For the time being, with the Fed on course to raise rates to 3% before the end of the summer, risk assets may remain biased to the downside, clouding the S&P 500 and the Nasdaq 100 outlook.