The new COVID-19 variant has plagued financial markets on Friday causing mayhem with broad-based losses throughout most asset classes. Safe-havens were the only winners during midday trading and will likely remain until market close. Brent crude was roughly 6% down on the day (at the time of writing) due to contagion concerns around economic growth should the virus become a systemic risk. Demand forecasts may be revised lower should the new strain increase fourth wave complexities and further downward pressure on crude oil prices.

Earlier this week the U.S. declared the release of 50MMbbls of crude oil while other countries have pledged to take part in a synchronized release of varying quantities. India, China, South Korea, Japan and the U.K. are currently included. For more details around the announcement, take a look at my colleague Richard Snow’s overview.

The release will cause previously unexpected supply to flood the market in hopes to restrain climbing crude oil prices which has been represented in both WTI and brent price action.

Chinese PMI data has been steadily declining MoM with October hitting yearly lows. Oil bulls will be looking at next weeks print to give some hope for further upside. A print above 50 generally points to an expanding manufacturing sector and vice versa. Anything above 50 should give some short-term respite to falling oil prices. 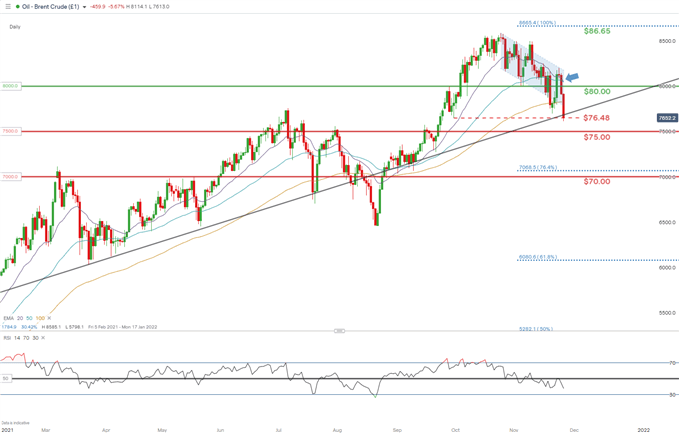 Brent crude has now firmly cemented the $80.00 psychological level as resistance after plunging in early trading on Friday. The long-term trendline support level (black) is now being tested coinciding with the September swing low at $76.48. The bullish flag (blue) pattern may still be under consideration if bulls can push Friday’s daily candle back within the flag.

The Exponential Moving Averages (EMA) may be suggesting a bearish signal as the 20-day EMA (purple) crosses below the 50-day EMA (blue arrow). Known as a bearish crossover, the signal often results in ensuing price depreciation.

The Relative Strength Index (RSI) reads around the 40 level which is indicative of bearish momentum and has leeway to push lower into oversold territory.

IGCS shows retail traders are marginally net long on Crude Oil, with 55% of traders currently holding long positions (as of this writing). At DailyFX we typically take a contrarian view to crowd sentiment however, the change in recent shorts and longs effect a mixed signal.