Oil Price Turnaround: A Possible Case of ‘Sell the Rumor Buy the Fact’?

Much has been said in 2020 about a ‘V-shaped’ recovery when referring to the bounce back in the economy but it looks like oil has just completed its own version – albeit on a much smaller scale.

On Friday last week we saw a near 4% decline in the oil price as rumors of a coordinated special petroleum reserve (SPR) gained momentum. Then on Tuesday President Biden’s administration announced the release of 50 million barrels of oil alongside smaller releases from Britain, Japan, South Korea India and China; said to amount to 70-80 million barrels in total. However, 32 million barrels are said to be an exchange, or loan, that will need to be repaid at a later stage, while the other 18 million forms part of a pre-authorized sale.

The amount of 50 million barrels has been commended as a step in the right direction in efforts to lower prices but the exchange/sale structure complicates the attractiveness of the offering as there is likely to be some form of interest payment due on the 32 million barrels. All in all, the combined release adds less than one day of global consumption which the market looks to have processed rather quickly as oil prices rose back towards last week’s high after details of the release hit the news wires.

Crude prices are relatively flat after Tuesday’s close (daily) after rejecting the 100% Fib retracement (77.60) of the July to August decline. The Fibonacci extension of the same move captured the yearly high at the 161.8% extension – a level often used for target setting or liquidating existing positions.

Prices may hover above the 80 mark on the back of the recent bullish move but a retracement towards $80 is not to be discounted. In the next week, price action become sensitive to any OPEC + official communication/response to the recent supply additions. 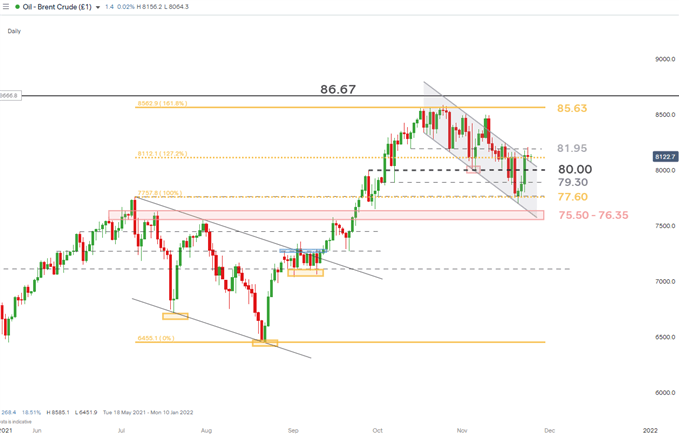 There is yet to be any official OPEC + response as the energy producing countries are still to meet next week. However, according to an OPEC source, the organization’s Economic Commission Board (ECB) expects the recent increase in oil supply to lead to a surplus of 1.1 million barrels per day.

OPEC + remain set to meet on the 2nd of December to discuss the SPR release and other demand and supply expectations heading into 2022.

IG captures data around WTI prices which is being used in this analysis as a proxy for market sentiment in the crude oil market. 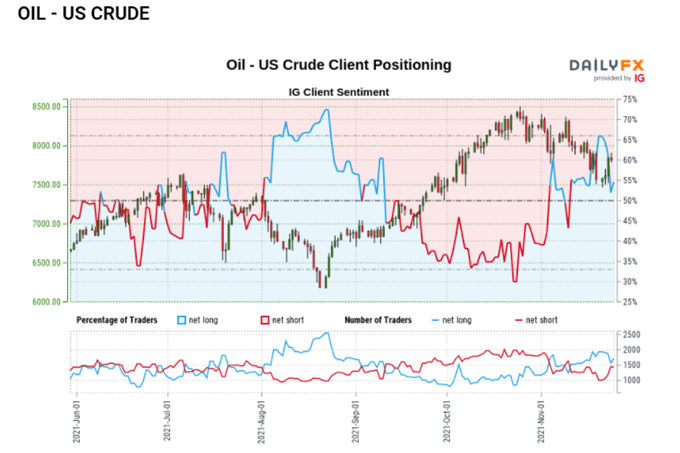 Positioning is more net-long than yesterday but less net-long from last week. The combination of current sentiment and recent changes gives us a mixed Oil - US Crude reading.