The long-awaited rate decision is here, and the FOMC has just issued their statement to announce a start to tapering asset purchases to the tune of $15 billion per month. This puts the bank on schedule to finish tapering in H1, 2022.

As Chair Powell has said multiple times in the past, tapering and rate hikes are different matters altogether, but by finishing bond buys in the first half of 2022, the bank is on track to begin hiking rates later in the year.

The motivation to tighten policy is brought on by persistently strong inflation numbers, which haven’t turned out to be as transitory as the Fed would’ve liked after inflation spiked above 4% in April. CPI printed at 5% for May and since then, there hasn’t been a print below 5.3% and last month saw inflation tick back up to 5.4%.

The Fed’s inflation target has long been 2% but last year the bank adjusted their strategy to instead focus on average inflation targeting, giving them more operating room considering the economic dynamics around the pandemic. But that additional operating room appears to have not helped matters regarding inflation and the question now is how quickly the bank may be looking to normalize rates should inflation not begin to pull back in the near-term. 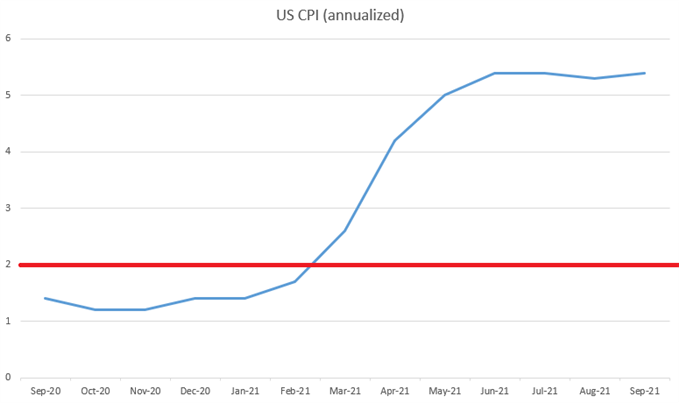 The initial reaction in USD has been a quick bearish shot, suggesting this was already rather priced-in to the equation. The presser is where things can get interesting for the USD as the focus will be on Powell's comments and whether he hints towards more than one rate hike on the horizon for 2022.

US Dollar One Minute Chart

Going along with that USD weakness was a quick shot of equity strength with the S&P 500 briefly touching up to another fresh all-time-high. The move has since pared back a bit, but still net positive since before the statement release.

USD Back to Pre-Release Levels

Powell hasn't even sauntered up to the lecturn yet and already the USD has snapped back to pre-release levels. DXY was 94.05 ahead of the statement and currently trades above the 94 handle with a little over 5 minutes until the presser begins.

SPX Back Up Towards Highs Ahead of Presser

Presser is about to begin but stocks are right back up towards the ATH that was set just after the statement release, and above the prior ATH from yesterday of 4627.

One of the notable takeaways from the first 30 minutes of this rate decision - Yen weakness. The Yen is highly sensitive to rates and and USD/JPY is getting a bump from a key area of support around the 113.80 level.

First question from the presser taken from Nick Timiraos of the WSJ, and he pointedly asked whether the Fed was looking at one or two hikes for next year.

Powell successfully side-stepped. He said 'supply shortages' will remain into next year, and inflation should begin to move lower in the second or third quarter.

Powell just said that he thinks the Fed should be patient and that policy will adapt appropriately.

There's a general sense of strength in stocks so far with the S&P 500 holding near that ATH. But the Russell 2000 is absolutely flying higher - and it especially liked that last answer from Powell where he successfully side-stepped the rate hike question.

We're 20 minutes into the presser and stocks found a statement that they really liked, when Powell responding to a question said 'we wouldn't want to surprise markets'.

Powell again asked about rates and he's side-stepped but has said that 'The Liftoff Test' hasn't yet been met, and for that he's looking at maximum employment.

Stocks are happy, Fed is dovish even with today's taper announcement. S&P 500 is currently up .62% since the statement release.

We're in the climate change portion of the Q&A and Powell just punted on the topic, instead pointing to elected officials to address the problem.

'We're not the people that will decide the strategy on climate change.'

USD Down Points to Dovish FOMC

As another point of recognition for today's dovish outlay, the US Dollar is at a net loss since the release of the statement.

US Dollar One Hour Price Chart

Powell asked what the Fed plans to do with the balance sheet once taper completes and ended up explaining the benefits of Yield Curve Control.

Some were expecting a warning on rates that has clearly not been delivered today. Stocks continue higher, S&P 500 now testing underside of a prior trend-line, another fresh ATH.

updates complete, thank you for reading, we will be back for the December FOMC rate decision, at which point we'll get updated projections and forecasts to see if the Fed is growing more hawkish in the face of inflation.

Markets Around the November Fed Meeting – The Macro Setup