Wednesday’s huge sell-off in the cryptocurrency space saw the market’s capitalization fall by around $1 trillion from the high seen earlier this month. The crash, fueled by stories of China widening its ban on cryptocurrency usage, sent markets into a seemingly unstoppable spiral lower, with a wide range of coins and tokens losing 40% to 50% in a matter of hours.Later in the session, the market regained some composure with losses pared-back, after a series of positive tweets hit the screens. A tweet by Elon Musk saying Tesla has ‘diamond hands’ – indicating that Tesla will not be selling its Bitcoin holding – turned sentiment positive. Later another set of tweets by Justin Sun (2.7 million followers) showed the market heavyweight, and the owner of the cryptocurrency platform TRON had bought $152 million of Bitcoin and just under $136 million of Ethereum during the meltdown. Sun added, ‘I’m not selling’.

While the market is now edging higher, it remains well below pre-crash levels and the rebound may come back under pressure. Yesterday’s wipe-out has caused untold damage, not just to trader’s P&Ls but also to market sentiment, a noted driver of cryptocurrency price action. Price volatility is at extreme levels not seen before, despite the many market crashes over the years, and this needs to dampen down if a sustained recovery is to occur.

Bitcoin lead the fightback yesterday and currently trades either side of $40,000 after hitting a Wednesday spike low of just over $30,000. One market volatility measure, the Average True Range is shown at the bottom of the chart, shows the 14-day range at $4,700, a level that makes trading Bitcoin extremely risky. A period of consolidation is needed before entering the market is justified, despite the CCI indicator showing BTC in heavily oversold territory. 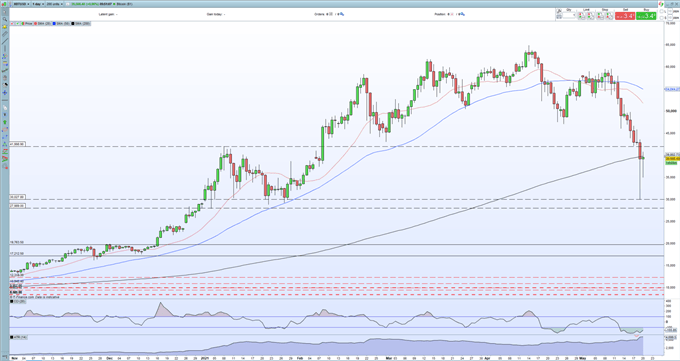 Ethereum, a notable market outperformer of late, broke below $2,000 for a brief time yesterday, before pulling back after running into a cluster of prior lows and highs. The second-largest coin by market capitalization hit a record high of $4,380 just over one week ago. Again Ethereum looks heavily oversold and is flashing extreme levels of volatility, but yesterday’s blow-out candle top near $3,500 needs to be regained before confidence can be restored. 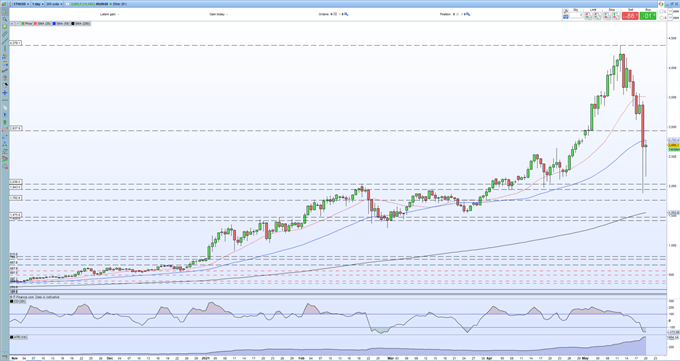