March marks the one-year anniversary of the Covid-19 pandemic and its impact on the world economy and financial markets. The Euro strengthened sharply in March of 2020 as risk assets sold off and investors fled to cash and safe-haven currencies. Since this spike, the Euro has mostly headed lower against a number of pairs.

EUR/CAD resurged again in August, rising to trade just shy of the March high, near the 1.6000 level. The pair traded lower after that high, consolidating between the 1.5400 and 1.5800 levels through the end of 2020. 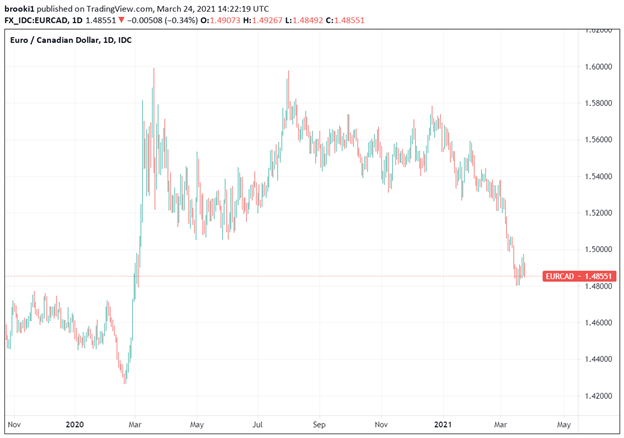 After a break lower and an attempt higher in January, EUR/CAD accelerated downward in February and March as the Canadian Dollar rebounded, buoyed by rising oil prices and economic data prints far above their forecasts. EURCAD hit a pandemic low in mid-March, finding support at the 1.4800 level. The pair had since edged slightly higher as volatility in oil prices translated into some weakness in the Canadian Dollar.

Further moves in the pair may by driven by further movements in the price of oil and by the Bank of Canada. On March 23rd, the Bank of Canada began to provide guidance on the tapering of QE and announced the termination of its emergency liquidity facilities. A tightening of monetary policy should translate into further Canadian Dollar strength in the future, putting downward pressure on EUR/CAD.

EUR/NOK declined quickly from the March 2020 high around 13.0000, finding support around the 10.5000 level throughout the summer. The pair then surged to multi-month highs above the 11.0000 level in the fall. 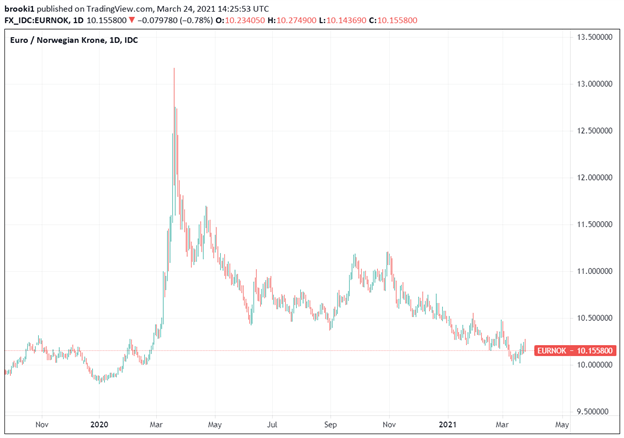 EUR/NOK broke below the 10.5000 level at the beginning of the new year and has remained there since, with the level now playing the role of resistance rather than support. The pair bottomed just above the 10.0000 level in early March, trading at its lowest point since February of 2020. While the pair has slightly rebounded since hitting these lows, it continues to trade around its lowest levels of 2021.

Like the Canadian Dollar, the Norwegian Krone has been buoyed by the rise in oil prices in 2021. In another similarity to recent moves in the Canadian Dollar, the Norges Bank, the central bank of Norway, also rolled out guidance on monetary tightening in recent weeks. At their mid-March policy meeting, Norges Bank officials announced plans to start raising their benchmark rate in the latter half of 2021, pulling forward a hiking cycle that was originally expected to begin in early 2022.

After hitting a ten year high in March of 2020, EUR/SEK steadily declined through July. In the latter half of the summer, the pair found support around the 10.2500 level before resurging to a multi-month high in late September, around 10.6500. The pair then reversed, continuing back on its downward trend. 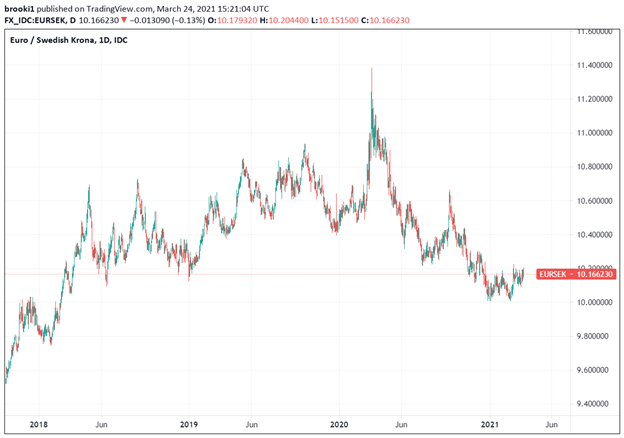 Further moves in EUR/SEK depends on the economic fundamentals of the two currencies. Swedish inflation recently printed well below forecasts for the month of February, falling to 1.5% in February from 1.7% in January and missing the expectations of 1.8%. Inflation in Sweden continues to remain below the central bank’s target, raising fears that the Riksbank will be forced to return to the negative interest rate policy it abandoned at the end of 2019. Such a move will likely drive the Euro higher against the Krona.

Click here to learn more about trading the EUR/SEK and EUR/NOK pairs.

In general, further moves in these Euro pairs will also be dependent on the path of the Eurozone economy. A resurgence in Covid cases and slow vaccination rates have led to the reinstatement of lockdown measures across Europe and will act as a drag on the recovery and economic growth.

Like in the US, longer-term yields on Eurozone government debt have risen notably in recent months. The ECB announced plans to increase the pace of bond purchase under its QE program at its March policy meeting, reaffirming the commitment to keep borrowing costs low.

In speeches and press releases, some ECB members have tried to talk down yields or spoken on the potential of a Yield Curve Control program. While the full course of action remains to be seen, it is clear that many at the ECB view a continued rise in yields as another threat to the economic recovery.