Main Point: Flash Eurozone PMIs cratered in April with the composite figure plunging to 13.5 (Expected 25.7) , marking the lowest reading on record where the services sector felt the largest impact (11.7). As such, this provides further confirmation that the Euro Area will see a sharp recession. Looking ahead, the focus will be on the EU summit, in which market participants will be keeping a close eye as to whether EU ministers can agree to joint issuance.

Record Contraction in PMI: IHS Markit highlight (survey covers April 7-22responses) that the lockdown measures enforced by governments contributed to a record contraction in PMIs with social distancing weighing heavily on the services sector. Alongside this, IHS notes that the April survey signals that GDP in the Eurozone will show a contraction of 7.5%, adding that in the face of a prolonged slump in demand, job losses could intensify. On the inflationary front, factory input prices fell at a slightly reduced rate (albeit remaining among the fastest rate since 2016), potentially showing some upward price pressures due to the supply shortage. On the regional front, Germany had held up slightly better than France in the service sector, while Germany’s manufacturers took a larger hit. 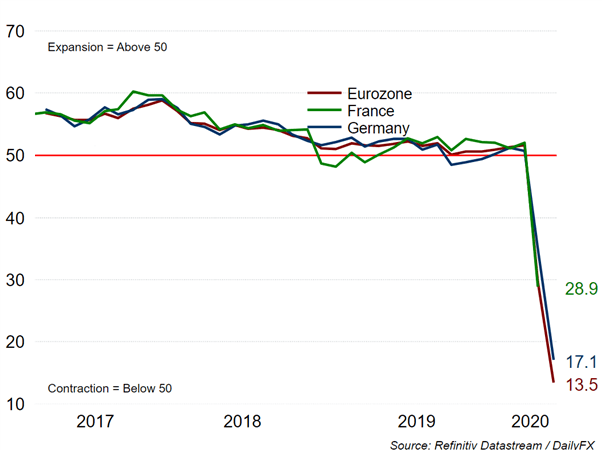 Market Reaction. In reaction to the dismal PMIs reports, the Euro came under pressure, breaking below 1.08 against the greenback to trade at two-week lows. Alongside this, risk assets had also softened with the DAX 30 dropping to intra-day lows. That said, the significantly weak backdrop in the Euro Area signals that the Euro is likely to remain soft against safe-havens (JPY, USD). EUR/CHF however, is failing to acknowledge the weak data, having traded in a tight 10pip range. (Full EUR/CHF analysis)

EU Summit: Tensions are beginning to show over discussions around debt mutualisation. Last week, French President Macron stated that the EU risks unravelling if it does not embrace financial solidarity and thus called for common debt issuance. However, the idea of debt mutualisation has been strongly opposed by Northern European members, particularly Germany and the Netherlands. As such, we look to peripheral spreads (Bund/BTP spread) for sentiment over the Eurogroup meeting, in which failure to agree a package could see spreads widen, putting further pressure on the Euro. Alongside this, EU officials yesterday noted that details of a recovery fund may only be decided by June or July, therefore details of any agreement may be relatively light.