The Dow Jones, and US stocks in general have been quite bullish, but a short-term pattern along with resistance could set into motion a small short-term decline. On the daily the Dow is riding along a well-defined top-side parallel extending well into last year. It is moving in the direction of the trend, so it isn’t considered the strongest form of resistance, but resistance nevertheless. On the hourly time-frame a small rising wedge is forming, a pattern that if triggered on the downside could bring with it some short-term selling. It could always break to the top-side, so waiting for a confirmed break here will be the key. 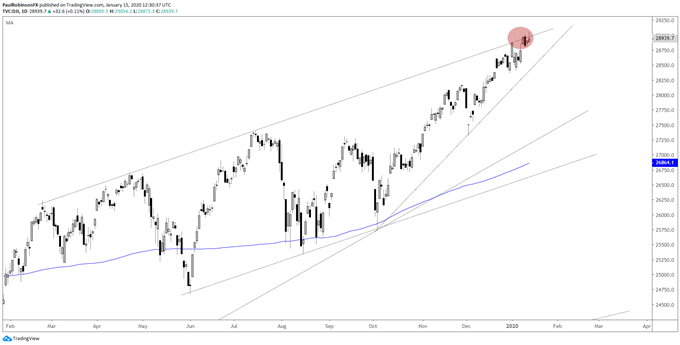 The DAX is caught between a rock and a hard place. It sits on top of a broken range, but just beneath the record high at 13596, making it a tough buy or sell. But the trend is up and risk sentiment is still strong, so for now giving the benefit of the doubt to the long-side to get through to a new record high.

DAX Daily Chart (out of range below ATH) 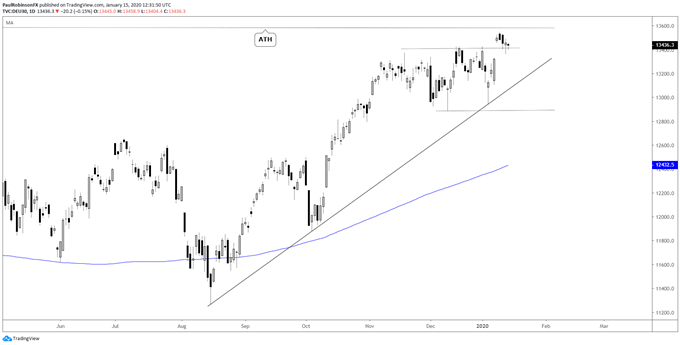 Crude oil got crushed on de-escalation in Middle East tensions, but with it having dropped down to trend-line and 200-day support it could see a bounce. That might be all the edge there is in this chart for now. Overall, oil is an avoidable market in my opinion, as there is no discernable trend or trading bias.