Sterling recovered from its initial dip to break above the 1.30 handle for the first time since May. Brexit uncertainty continues after lawmakers voted (322-306) for passing the Letwin amendment, which requires that legislation is to be ratified and passed until the approval of the Brexit deal. Consequently, UK PM Johnson had been forced to request an extension from the EU due to the Benn Act, thus further reducing the likelihood that the UK will see a no-deal Brexit. As it stands, the EU has stated that it will wait for developments in parliaments before announcing its decision to allow for an extension.

Going forward eyes will be on whether the Speaker allows parliament to vote on the Brexit deal, however, given that the same issue cannot be debated twice in one sitting, it is likely that Speaker John Bercow will unlikely allow for another parliamentary vote. As such, the government will have to put forward a second reading of the Withdrawal Agreement Bill (effectively meaning a new meaningful vote), although it is likely that parliament will look to attach amendments to the bill.

Nonetheless, Sterling volatility will remain elevated throughout the week. Elsewhere, CFTC data, surprisingly highlights that net shorts in GBP were largely unchanged, despite the near 5% rally in the currency throughout the reporting period.

Canadian Dollar notably firmer on election day with USD/CAD briefly dipping below the July 31st low (1.3105). Polling indications on the outcome of the election are expected to be released around 0245BST (as was the case in 2015), while polling closes at 0300BST. In regard to potential market reaction to the election, options are pricing little in the way of notable volatility with an implied move at 38pips. 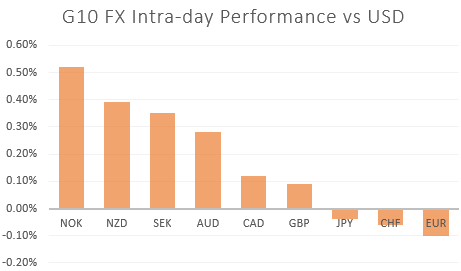