As Canada goes to the polls today, the two leading parties, the incumbent Liberals and the Conservatives, are neck-to-neck with each expected to get 30%-32% support. If these numbers are correct, it seems very likely that a minority-government will be formed with either the smaller New Democratic Party (NDP), Bloc Quebecois or the Green Party. In turn this will affect the value of the Canadian Dollar, with financial markets not keen on minority governments who find legislation difficult to pass or countries whose main political parties have become increasingly entrenched.

USD/CAD has fallen sharply in the last 10 days from just under 1.3350 to a current spot price of 1.3110, the lowest level since the end of July. The move has been helped by the weakness in the US dollar and the fact that Canadian rates (1.75%) may soon be higher than US rates (1.75% -2.0%) with the Fed fully expected to trim interest rates by another 25 basis points this month. The Canadian Dollar is one of the strongest G 10 currencies this year, despite the knock-on risks attached to the ongoing US-China trade war.

The USD/CAD chart shows the next level of horizontal support around the mid-July double low around 1.3015. Below here a reversal lower low, made on October 1, 2018 at 1.2783 would be a longer-term target. If the Canadian weakens post-election, a move back to 1.3240 is likely where resistance from the 20- and 50-day moving averages would act as resistance. A break and close above here would open the way to the 200-day moving average at 1.3295 and the recent highs around 1.3350. The CCI indicator currently shows the market as oversold. 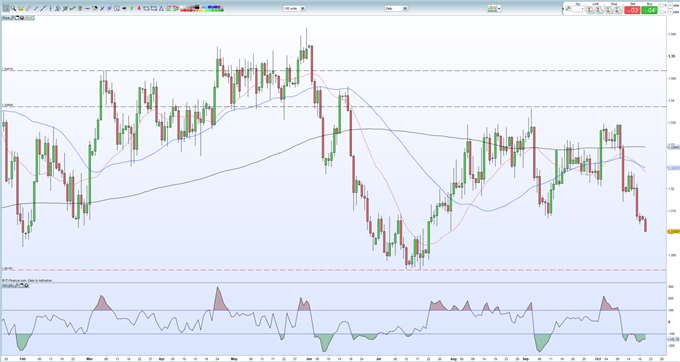 However recent daily and weekly positional changes give us a mixed outlook for USD/CAD.

What is your view on the Canadian Dollar and the US Dollar – bullish or bearish?? You can let us know via the form at the end of this piece or you can contact the author at nicholas.cawley@ig.comor via Twitter @nickcawley1.