Risk sentiment and high beta currencies (AUD, NZD) have been boosted, while safe-havens suffer following the latest source reports, which noted that China are open to a partial trade deal. The report highlighted that China would accept a limited trade deal provided that the US refrained from placing additional tariffs on Chinese goods, including the scheduled tariffs later this month and in December. While China would offer non-core concessions involving the purchase of US agricultural products but would maintain current stance on the major sticking points. Despite these latest reports, a deal between the US and China remains unlikely.

GBP/USD sees yet another choppy session as Brexit headlines spark short-term volatility. Reports from the Times this morning that the EU were to offer a major concession to the UK in order to break the impasse lifted the Pound to session highs, however, the move had been faded on the back of the DUP rejecting the offer, while the EU later denied such reports. That said, the Pound will remain volatile a susceptible to sharp reactions in response to Brexit headlines. However, our base remains that the UK will head to a general election before any type of Brexit.

FOMC minutes will be in focus later today, however, given the recent rhetoric from the Fed and the deterioration in the US data (most notably, ISM surveys), the minutes could be perceived as somewhat outdated.

Yesterday, Fed Chair Powell stated that the central bank will allow its balance sheet to grow in order boost bank reserves and subsequently place pressure on short-term interest rates via buying treasury bills. However, Powell had been clear that while this does sound like QE, this is not the case. 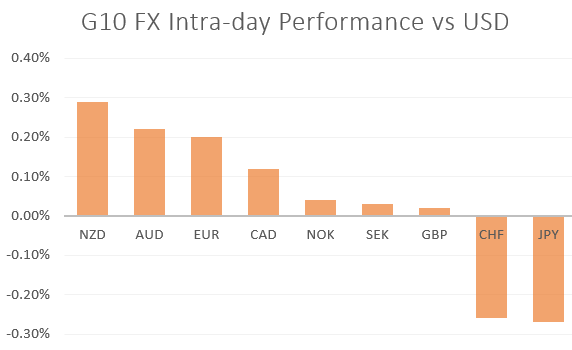