The war of words between the UK and the EU continues with both sides playing the blame game. While senior EU officials accuse UK PM Johnson of playing ‘stupid games’, the UK say that the EU are making a deal ‘essentially impossible’ by not shifting its position on Northern Ireland. Tuesday’s talks between German Chancellor Angela Merkel and UK PM Boris Johnson highlighted the gulf between the two parties, adding to fear that the UK will leave the EU on October 31 without a deal. PM Johnson will meet the Irish Taoiseach on Friday for further talks, but expectations are low for any positive outcome.

Sterling trades just above 1.2220 against the US dollar, after breaking below the figure on late Tuesday, and may struggle to push appreciably higher on the back of the latest breakdown. The US dollar also remains firm ahead of Fed Chair Jerome Powell’s speech in Kansas later today, while the focus of the session will be the latest FOMC minutes at 18:00 GMT.

GBP/USD seems to be holding above 1.2200 for now, but this support level remains under pressure as we head towards the end of the week. A break below would open the way for a move all the way back down to 1.2110 or lower, with a full breakdown eyeing the September 3 low at 1.1959, the lowest level seen since October 2016.

Sterling bulls will find various recent highs and the 20- and 50-day moving averages blocking the path to 1.2415. A break above here opens the way to 1.2582 and a close above this level would give the daily GBP/USD chart a positive hue. 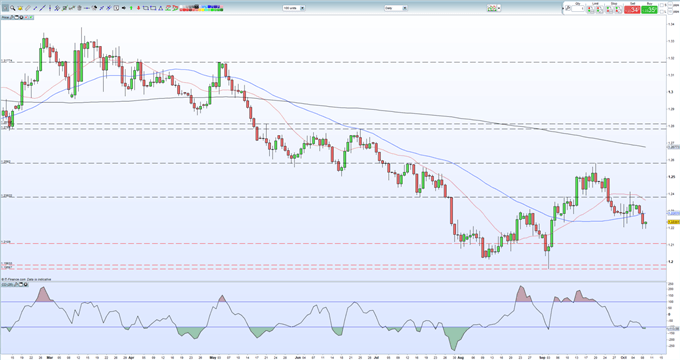