S&P 500 Forecast: Stocks Rebound, but will the Recovery Continue?

S&P 500 Forecast: Stocks Rebound, but will the Recovery Continue?

The S&P 500 opened Wednesday trading well beneath Tuesday’s close and drilled even lower in the early hours of the session as the risk aversion was mirrored in gold and US treasuries which surged to their highest levels in years. That said, the selloff was short lived as the S&P 500 and other stocks began to regain their footing as the day progressed. 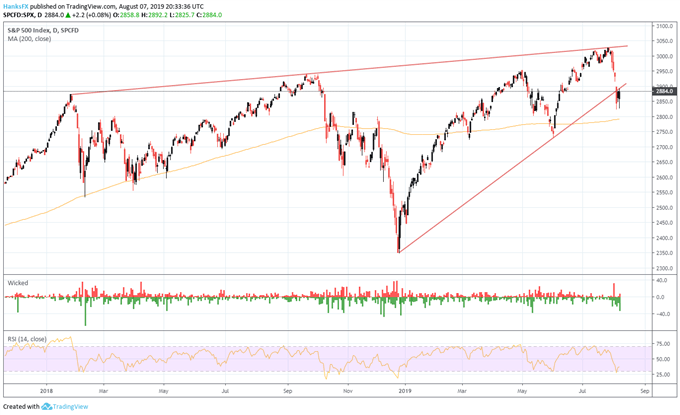 Consequently, the S&P 500 closed Wednesday trading 0.08% higher alongside a 0.4% gain in the Nasdaq and a -0.1% loss for the Dow Jones. Trading roughly 2% lower at its trough, a recovery of this magnitude saw the S&P 500 post its largest lower wick since May 10. Apart from the May recovery, Wednesday’s rebound offered the longest lower wick since December 27. For the Dow Jones, the 370-point rebound was the largest since December 10.

Evidently, some traders are comfortable with the depth of declines exhibited on Friday and Monday as they now look to purchase shares at a discount. On the other hand, some investors are warning that the knife may continue to fall. As always, the battle of the bulls and the bears rages on, but the fundamental forces behind the initial move still remain and technical resistance now stands in the way of a continuation higher. To that end, RSI on the S&P 500 has crept out of oversold territory and the Index resides narrowly beneath the ascending trendline from late December and May. 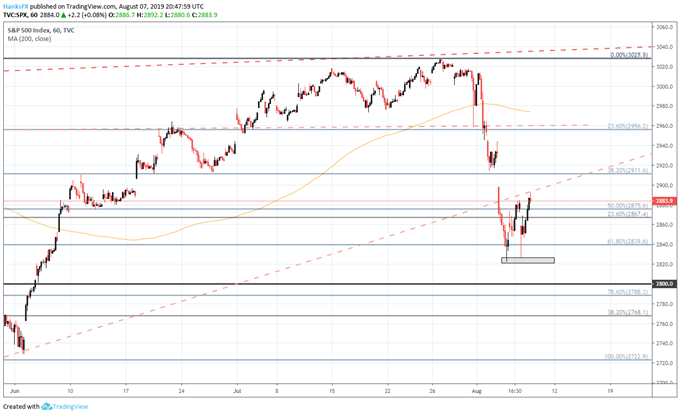 If the rebound is to continue, bulls will have to surmount the trendline around 2,885 before they can set their sights higher. Personally, I think It would be presumptuous to say stocks have entirely come to terms with the newest tranche of tariffs. Further, IG Client Sentiment Data reveals that retail traders have reduced their short exposure but remain net short the S&P 500. 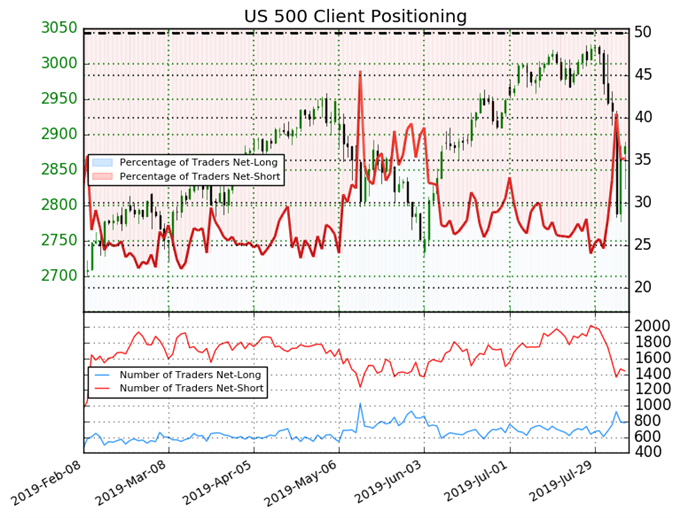 As price action unfolds, follow @PeterHanksFX for updates and analysis on the fundamental and technical factors impacting the S&P 500.

While we typically view IG Client Sentiment data as a contrarian indicator, the fact that continue to shed their short exposure could suggest the selling is not over. In May for instance, traders were overwhelmingly short the S&P 500 and reduced their short positions after the Index declined in the middle of the month. That shift in positioning preceded subsequent losses that occurred as the calendar ticked over into June. Whether history will repeat itself is yet to be seen, but traders should be wary of clinging to hopes of an immediate recovery to all-time highs.