In the beginning of August, emerging market equities are finding themselves under increased selling pressure in the aftermath of US-China trade tensions heating up. On August 1, US President Donald Trump announced that the country will proceed with imposing an additional $300b in Chinese import tariffs at an initial rate of 10 percent, adding that these levies may be raised beyond 25%.

This marked an end to the trade truce the world’s largest economies reached at the G20 Leaders Summit at the end of June, effectively lasting a little over a month. During this time, Mr Trump offered doubt over the validity of the truce when he mentioned that he could still impose tariffs on China “if he wanted”. In recent days, he fueled more uncertainty when he showed hesitation to whether he could accept an offer from China.

In 2018, we saw the MSCI Emerging Markets ETF (exposure to the largest companies in developing countries) collapse almost 30% as US-China trade tensions brewed and the Fed pursued aggressive monetary tightening. The former is a particular risk for Asia Pacific economies given regional trade relations with China, the world’s second-largest economy, at a time when its GDP growth rate is at its lowest since at least 1992.

Thus it is unsurprising to have seen central banks from the Philippines, Malaysia and recently Indonesia reduced benchmark lending rates to help support local growth and inflation. Retaliation from China against US measures can add fuel to investors’ concerns and risk reviving concerns about capital flight that were so prominent last year. This is while global growth at risk as manufacturing PMI across the world slows.

Taking a closer look at the MSCI Emerging Markets ETF (EEM), it peaked with an upside gap after the G20 Summit in Japan, trading to the downside ever since. Recent selling pressure has left it just off 40.90, former lows in 2017 which if cleared, expose a rising trend line from October 2018. Should trade tensions pick up pace, we may see this taken out as it eyes February 2017 lows at 37.39. 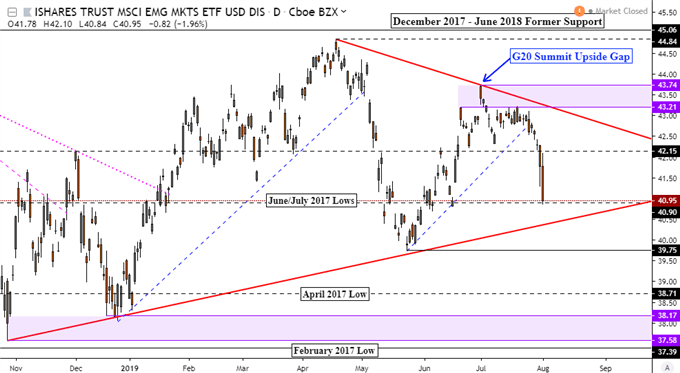 Troubling technical signs are also brewing in the MSCI Indonesia ETF where on a weekly chart, it is once again aiming lower after testing descending channel resistance going back to the end of 2017. With technical confirmation amidst the fundamental backdrop, we may the Indonesian index once again face rising channel support going back to the end of 2015 – red lines on the chart below. 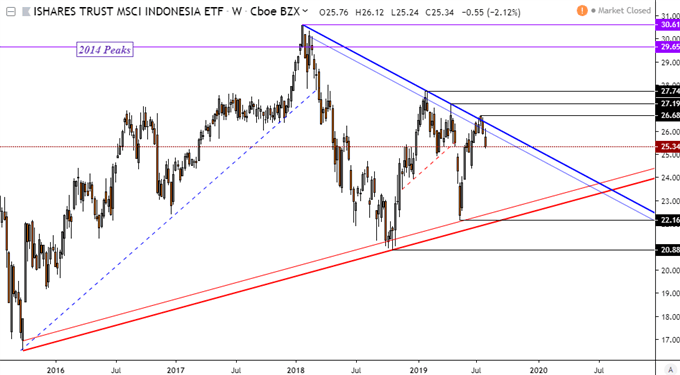 Turning our attention to the MSCI Philippines ETF weekly chart, it is aiming lower towards rising support from the end of 2018. Clearing 35.18 may pave the way for testing the trend line. If it is taken out, that will expose a psychological battier between 32.98 and 32.22 before targeting the lows last achieved at the end of last year. For more updates on ASEAN and emerging markets, you may follow me on Twitter here @ddubrovskyFX. 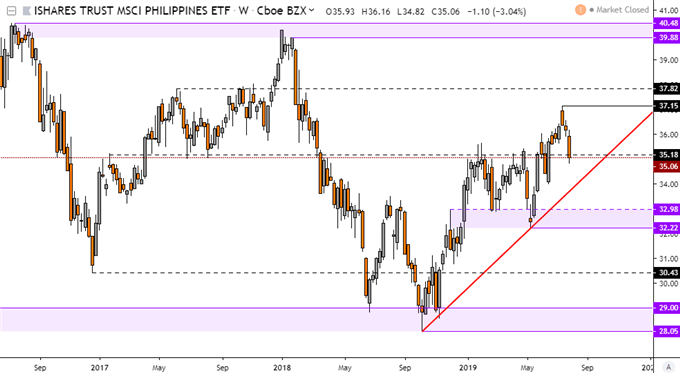