The US Dollar had multiple fundamental themes to propel its best performance in a day since July 5. During the European session, British Pound and Euro weakness in disappointing UK employment and German ZEW Survey data - respectively - likely drove traders into the Greenback. “No-deal” Brexit fears seemed to have compounded Sterling declines as UK Conservative Lawmaker Grieve noted the difficulty of blocking one.

Better-than-expected US retail sales then fueled a cautious tone of risk aversion as local front-end government bond yields rallied. The data printed 0.4% m/m in June versus 0.2% expected, still weaker than May’s 0.5% growth. Then, the S&P 500 accelerated its selloff when US President Donald Trump said that he could still impose further tariffs on China “if he wanted”, undermining last month’s G20 Summit truce.

What is interesting is that by the end of the day, looking at Fed funds futures, odds of a 50 basis point rate cut later this month actually rose slightly to a nearly 30% chance from 25% yesterday. This is a reminder that more aggressive easing from the Fed may not necessarily bolster sentiment if the underlying reasons for such actions are dire. The markets are already anticipating perhaps three rate cuts by year-end.

Moreover, this speaks to concerns over the health and vigor of the global economy where you could see this impact on crude oil prices. The commodity tumbled nearly three percent on Tuesday in its worst performance in two weeks, taking out rising support from early June and opening the door to perhaps testing 56.11 ahead.

Turning my focus towards Asia Pacific markets, S&P 500 futures are pointing cautiously lower which hints at a tepidly pessimistic session ahead. A lack of critical economic event risk does place the focus for forex on sentiment. If the highly-liquid US Dollar continues its rise ahead, this could bode ill for the pro-risk Australian and New Zealand Dollars.

Taking a closer look at AUD/USD technically shows early warning signs of a reversal that could potentially be in the cards. After range resistance held (0.7022 – 0.7048), Tuesday’s candle formed a Bearish Engulfing. This is coupled with negative RSI divergence, showing fading upside momentum. A confirmation close to the downside opens the door to testing potential rising support from mid-June. 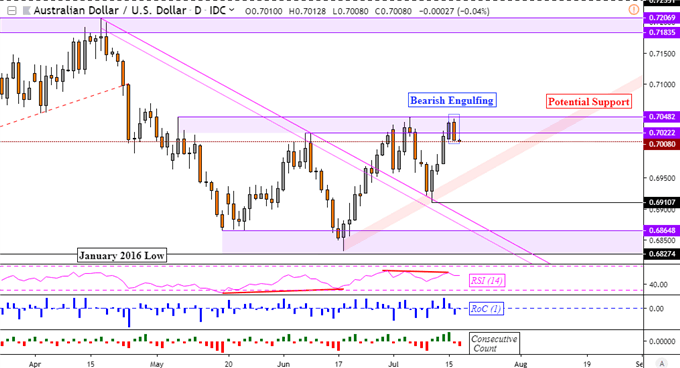