S&P 500 and Nikkei 225 Charts Bearish, Stocks Drop Before the Fed

The Nikkei 225 was down about ¾ of a percent despite reports from a Global Times editor that current US-China trade talk atmosphere “is good”. Meanwhile in Australia, the ASX 200 was down about 0.2 percent. Better-than-expected local inflation data helped to pour cold water on further near-term RBA rate cut bets which is relatively disappointing for sentiment.

Taking a look at Nikkei 225 futures, showing afterhours trade, the index has been cautiously aiming lower after testing descending resistance from October 2018. If near-term support is taken out ahead at 21475, that may open the door to retesting a key psychological barrier between 20875 and 21015. Otherwise, key resistance stands as the outer boundary at 21825 on the chart below. 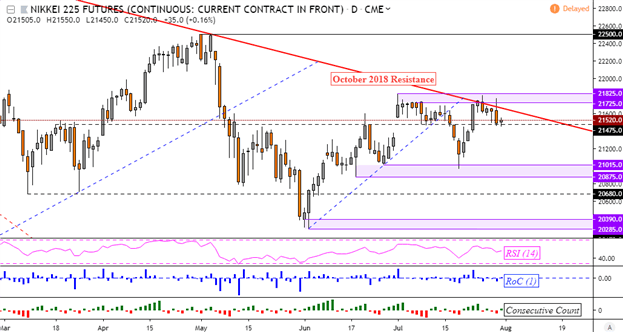 The sour mood in financial markets despite the latest update in trade talks might be for a couple of reasons. First, on Tuesday US President Donald Trump undermined what could be supportive progress in current negotiations between his team and their Chinese counterparts in Shanghai. Before talks began, he said that he is “not sure” that he will accept an offer.

Meanwhile, the markets are awaiting the level of dovish surprise when the Federal Reserve is anticipated to cut rates by 25 basis points for the first time since 2008. Fed funds futures are implying about 2 to 3 cuts by the beginning of next year. The central bank has also alluded to pausing its unwinding of the balance sheet. Expect risk aversion if the central bank disappoints.

Eyeing S&P 500 futures, the index has maintained its uptrend since the end of May, guided by rising channel support from the middle of June. Negative RSI divergence shows that momentum to the upside is fading which can at times precede a turn lower. Clearing support at 3006 opens the door to testing the 23.6% Fibonacci extension at 2971. 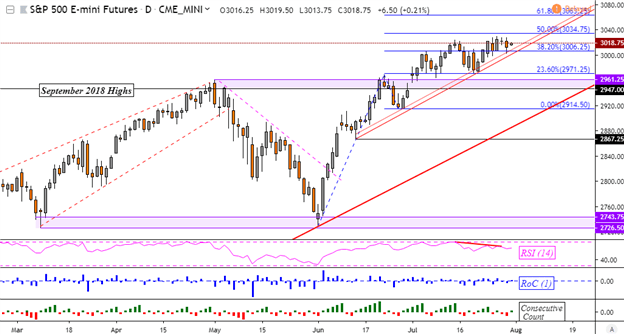