Amid a tumultuous trading session, Disney (DIS) was one of the few stocks on the Dow Jones to close in the green. Anticipation for their quarterly report saw DIS shares climb 1.21% in Wednesday trading – only to climb another 1.63% in the after-hours session as the results were released. A strong quarterly performance from one of the Dow Jones’ hottest stocks should inject optimism back into the Average on Thursday. Upon the earnings release, DIS remained within the implied price range and above the sizable price gap.

While meaningful, Disney earnings pale in comparison to the larger issues plaguing the stock market. As trade war talks hit a rough patch, markets have sold off and the VIX has spiked. With all eyes on Friday’s deadline, insight into the effects of the economic bout will be offered Thursday with the release of US trade balance data from March. A deficit of -$51.1 billion is expected, climbing from February’s deficit of -$49.4 billion. 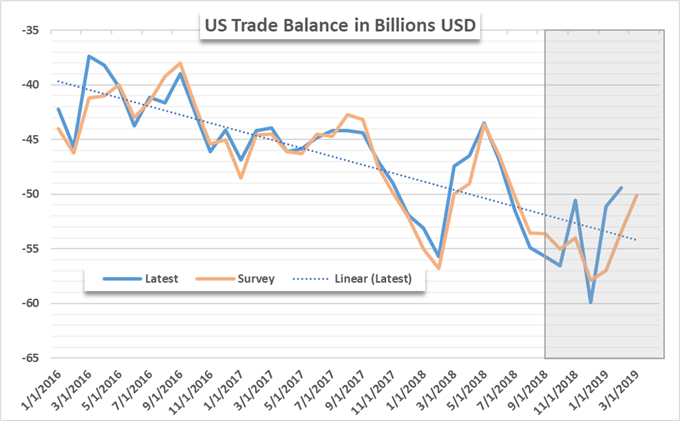 Since the US-China trade war began back in June 2018, markets have been offered 8 months of trade data. Because the data trails by two months, the shaded area above highlights data released from September to February – along with tomorrow’s expected balance. Although many economists have debated the exact impact of higher tariffs, the longer-term implications are unclear.

Similarly, the takeaways that can be garnered from the balance between the United States and China alone is also opaque. In February 2018, the United States imported $39.07 billion in goods from China while exporting $9.8 billion – resulting in a deficit of roughly -$29.26 billion. In 2019, imports in the month of February totaled $33.19 billion, accompanied by exports of $8.43 billion – resulting in a deficit of -$24.76 billion. 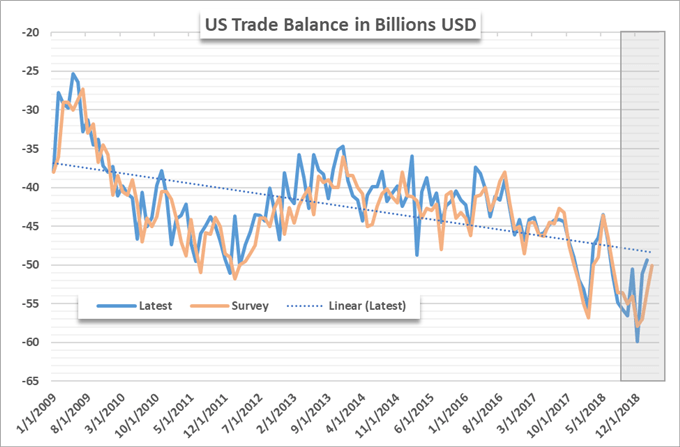 While the US-China trade deficit shrank in comparable time periods, the data is too noisy to draw a firm conclusion. One thing that is clear however, is the overall widening trade deficit of the United States. Despite the smaller deficit with China, the total balance continues to fall deeper into the red.

Over the last 9 years, the monthly average deficit has climbed to -$52.10 billion from -$32.49 billion. In tomorrow’s report, traders and investors will scour the data for any indication a trend has developed from the trade war. To that end, specific sectors like agriculture (soybeans) and larger goods like airplanes and machinery will be important areas to watch. The data will assist investors in forecasting the ramifications of a potential change in levy rates on Friday. Check back at DailyFX.com for a breakdown and analysis of tomorrow’s trade data.